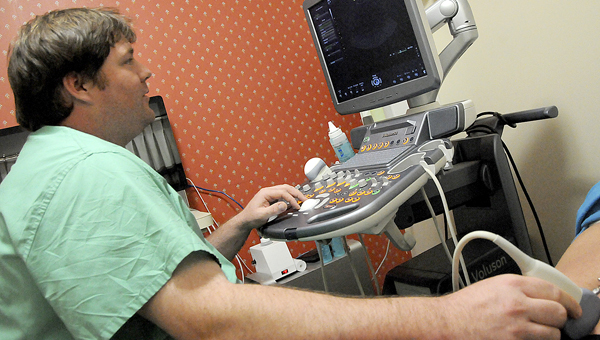 Brent Whiddon never planned on being a doctor, much less delivering babies, but now it’s a job he loves.

Originally from the Birmingham area, one of Whiddon’s first jobs in Selma was with the fire department in the 1990s. Whiddon’s schedule was quite busy. On days off from the Selma Fire Department, he worked as an emergency medical technician.

Whiddon said his grades were fairly high, and his wife encouraged him to begin looking at medical school. Though, he still needed to complete an undergraduate degree.

“I quit the Selma Fire Department to go to school, and two weeks later my wife and I found out we were going to have our first child,” Whiddon said.

His class schedule was double what most students take. Whiddon said he took 26 hours per semester.

Because he attended the University of Alabama-Birmingham for his undergraduate degree, Whiddon said the school was a natural choice for medical school.

“They have one of the top schools in the country,” he said. “It was kind of a no-brainer once I got accepted.”

Initially, he thought internal medicine would be his field of choice. After experiencing obstetrics and gynecology first hand, he quickly changed his mind.

“When doing rotations, you usually pick whatever you don’t want to do first,” Whiddon said. “I did OB first and there was no way that was something I wanted to do, but when I started doing it I got hooked.”

The next difficult decision came in 2011 when Whiddon was choosing where to go for his residency, near the end of medical school.

“I had done very well in school and was fortunate enough to do my residency at Parkland,” he said. “After residency I could have gone wherever I wanted to go. I chose Selma because I wanted my boys to grow up and enjoy the same type of things that I enjoyed during my childhood.”

Now, Whiddon runs his own practice on Vaughan Memorial Drive, which opened in August 2011.

Whiddon said he thinks of his private practice as a ministry and constantly advocates for his patients.

“For them to know that there is someone to talk to is just a huge relief,” he said.

But after operating as a doctor in Selma for a few years, Whiddon also had another realization — the doctors in Selma are talented, really talented. He attributes the talent mostly to a love for Selma.

“There is no other town our size the same quality of doctors,” he said. “They could be running a department at UAB.”

Robin Woodson Robin Woodson wasn’t born in Selma, and she didn’t spend her childhood here, but it’s where she plans... read more