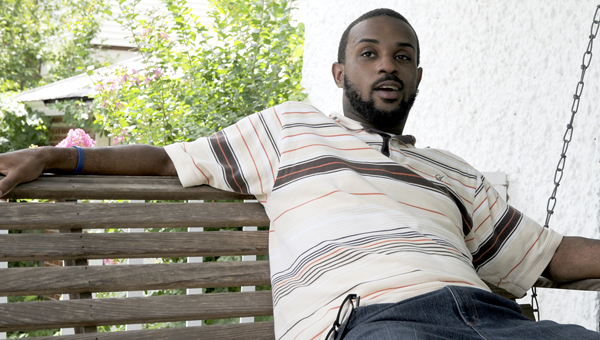 Selma resident Fronz Sanders talks about his experiences in Selma on the porch of a house in the city’s Old Town neighborhood. — Josh Bergeron

One Selma resident finds himself frequently looking for activities that cater to young people, but coming up empty.

Fronz Sanders, 26, isn’t from Selma, but moved to the area from Hoover for its low cost of living. After spending summers in Selma as a child and now as a resident of the city, Sanders finds himself wondering what Selma culture has to offer for the younger generation.

When the Dart landed on McLeod Avenue, in Selma’s historic Old Town neighborhood, Sanders was enjoying a summer afternoon on his mother’s porch.

His parents are originally from Selma, but Sanders calls Mobile home. He graduated from a Mobile-area high school and attended Alabama State University, earning a degree in history.

With the summer weather quickly heating up, Sanders said he’s often left wondering where to go in Selma for indoor activities.

“In weather like this, it’s too hot to go to the park,” he said. “It seems like the landscape of Selma just hasn’t changed. It seems like there are more stores closing than opening.”

Though he is a self-described pessimist, Sanders said more Selma residents should shop local, which could increase overall revenue and add to the number of offerings in the city.

“If I’m thinking about where I want to eat or go bowling, the first thing I think of is usually let me go to Prattville,” he said. “Selma sends their money away. The $50 to $100 you would spend going to Prattville or Montgomery could have been spent locally.”

Sanders listed a few options that he would like to see in the city — options that might be attractive to both young people and families.

“We just need somewhere to shop other than Walmart,” Sanders said. “Sometimes I just stay away because of the crowd and long lines. There is the bridge, but honestly there is nothing here that screams come to Selma.”

Sanders’ candid discussion extended to city government, but ended by saying he wants to see the city grow and prosper.

“There are things that I think Selma just lets fall to the wayside and say ‘ we will handle it when we get there,’” Sanders said. “If I am going to live here, I want to see the city grow.”

Afew miles east of the state’s original capital and several miles west of Alabama’s current one sits the most vocal... read more