Robert Cecil Radford was born on August 19, 1928 in the Old Vaughan Hospital on Alabama Avenue in Selma and died in his home on Union Street less than a block away eighty-five years later. 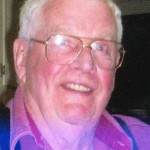 He graduated from A. G. Parrish High School in 1947, Alabama Polytechnic Institute (Auburn University) and was a member of Phi  Kappa Tau. He also graduated from the National Boy Scout Training Institute and National Wirebound Training Institute.  He was a District Boy Scout Executive for three years in South Alabama, then employed thirty-seven years as a container salesman for T. R. Miller Mill Company in Brewton,  After retirement, he served ten years as the Magistrate in the Selma Municipal Courts and fifteen years as a consultant to Pillsbury,  He hitchhiked over 25,000 miles in his younger days throughout the United States; thence came his love for travel.  With wife, Kathryn, by his side, they traveled to over seventy foreign countries for business, fun and frolic (his words).  He was a lifelong member of Elkdale Baptist Church.

The family will have a private family burial followed by a visitation to be held at Elkdale Baptist Church Wednesday, July 2, 2014 at 11:00 a.m.

The family would like to express heartfelt appreciation to his loving and faithful caregivers, Lucille Cole, Gurtha Moore, Carlos Watkins, Christine Baines, RN, Kimberly Pratt, the entire staff of AseraCare Hospice and the staff of Selma Funeral Home.

You may go online to view obituaries, offer condolences and sign the guest book athttp://www.selmafuneralhome.com/.