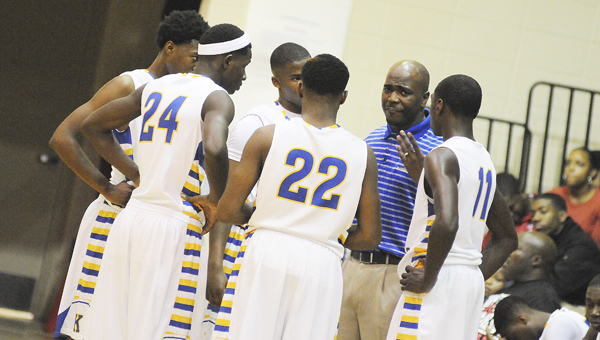 Keith basketball coach Tommy Tisdale and the Bears finished their summer basketball program with camps at the University of Alabama and Auburn University last week. Tisdale was happy with the progress his team made in their eight games played during the two camps.–File Photo

Year in and year out, Keith fields one of the most consistent Class 1A basketball teams in the state. This summer the Bears are trying to reload through play dates in hopes of keeping that run going.

The Bears leading scorer from last season, Anfernee Simmons, graduated and will play for Wallace Community College Selma next year, leaving a void for head coach Tommy Tisdale to fill this offseason. The Bears took part in four play dates during the month of June, with the last two at Auburn University and the University of Alabama.

During the two play dates, which closed out Keith’s summer basketball program, Tisdale was satisfied with how his team played — especially considering some of the opponents they faced.

“[We had] our first crack at 7A opponents, and we were pretty competitive against both of them, one at Auburn and one at Alabama,” Tisdale said. “We lost a close one and won one. We made a lot of positive strides throughout the camps.”

Keith finished with a 4-4 record through the two days of camp, but Tisdale wasn’t really concerned with winning games.

Instead, he wanted to develop some of his younger players that didn’t see a lot of playing time last season.

Kent James, a 6-foot-7, forward that will likely see an increased role this season, was among the bright spots.

“We literally went to Auburn without winning games in mind,” Tisdale said. “We wanted to make individual players better, and I told them every trip down the floor to throw him the ball and it was going to be up to him to do something with it or not.”

The Bears went to Auburn without Jaquan Simmons, one of the team’s most experienced players, which left John Pettway in the backcourt by himself. Pettway, who seems like the most likely candidate to take over Anfernee Simmons’ scoring void, still found a way to shine.

“For three games he may have played every minute of every game,” Tisdale said of Pettway. “He was getting that treatment that I always tell him about where [teams] run double teams and trap him to keep the ball out of his hands. He still persevered through it and went and got the ball.”

In one game, Keith found itself down eight points late, but the Bears would not be denied.

Tisdale, who loves it when his team finds itself in a tough situation during the summer, said he let his team know this was a great practice situation for the real season.

“I told the guys winning and losing does not matter this summer,” Tisdale said. “I haven’t seen a team yet win a summer championship, but this was a chance to be down against an opponent and have to fight to come back.”

The Bears responded as Tisdale had hoped, as Pettway hit a game winner after Keith rallied. The game winning shot came in Keith’s final contest of the summer.

D.J. Stiles throws out a pitch Friday night’s pre-major district tournament. Selma was eliminated by Thomasville after losing to them... read more