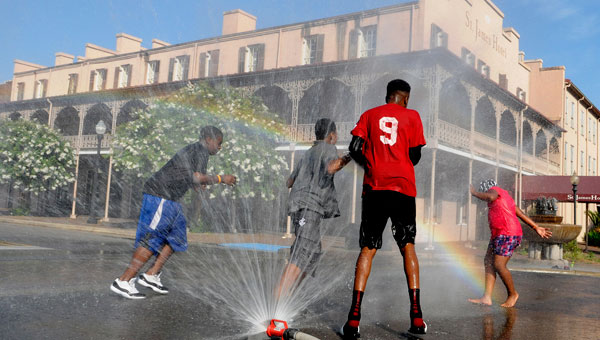 With the historic St. James Hotel in the background, children play in the sprinkler to beat the heat during the recent Jazz on the Grazz in downtown Selma. Strand Management took control of the iconic hotel Tuesday, taking over the operation from the city of Selma. (Christopher Edmunds | Times-Journal)

The historic, city-owned St. James Hotel is under new management.

Strand Management, with offices in Charlotte, Atlanta and Myrtle Beach, S.C., took control on Tuesday of day-to-day operations for the hotel after months of city management.

Strand’s contract is for one year with an option to renew for two, subsequent one-year terms.

Selma Mayor George Evans said relinquishing control of the hotel is a positive step in the right direction.

“I’m happy that we are out of it from the standpoint of operations because these people are pros,” Evans said. “As a result of that, they will identify all of the areas that need to be addressed.”

Strand’s most immediate task is to conduct assessments of the hotel, Evans said.

Strand senior vice president Andrew Pace said his company’s staff would look for potential health and safety problems as a portion of the assessment.

Strand is expected to present priority issues and problem areas to the city council following the company’s assessment, Evans said.

Strand will receive $4,000 per month or 3 percent of gross revenues, whichever is greater, according to the contract. The city previously transferred approximately $85,000 to the hotel’s budget for various expenditures, such as employee salaries and maintenance.

The $85,000 transfer is expected to last until the end of September.

In it’s initial presentation to the city council, Strand officials recommended that city government ultimately relinquish ownership and sell the hotel. On Tuesday, Pace said city government, as the owner, would be responsible for making a decision to sell. He said Strand’s responsibility is to improve overall guest satisfaction.

“We have to look at issues that distract from a perfect stay,” Pace said. “The community and the city are absolutely behind the hotel 100 percent. Everybody wants to see the hotel succeed and we want to see that too.”

Strand’s takeover comes a few days after “Selma” movie personnel filled the hotel, which resulted in two repairs. Prior to the movie crew’s stay, city government repaired a refrigeration unit in the hotel’s kitchen and purchased window air conditioning units for several rooms.

Evans said more repairs and renovations could be forthcoming as Strand continues its assessment.

The hotel’s history dates back more than 150 years. During the Civil War, the hotel was occupied by union troops at the Battle of Selma. Following the war, Benjamin Sterling Turner, the first African-American elected to U.S. Congress, operated the hotel.

Legendary outlaws Frank and Jesse James reportedly stayed in the hotel in 1881.

In the late 1800s, the hotel closed. About 100 years later, local investors purchased the hotel, raised several million dollars and officially reopened its doors in 1997.

More than a dozen people crowded the Selma-Dallas County YMCA’s basketball court on Monday. The YMCA has gone through a... read more