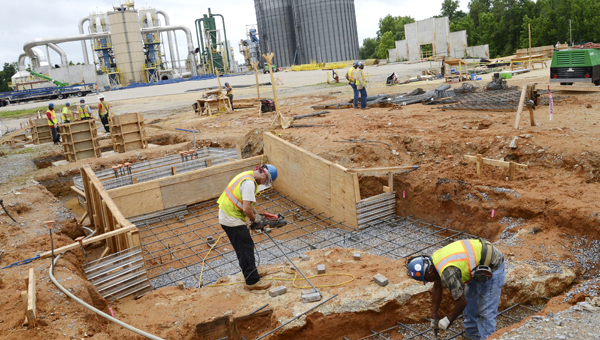 Construction crews continue work on the site of Zilkha Biomass Energy, located next to International Paper on the Alabama River. — Jay Sowers

Two years ago, a new industry came to Dallas County, proposing to produce and ship small pellets of wooden material across international borders from Dallas County.

Titled Zilkha Biomass Energy, the company proposed to compress wooden material into small, black pellets for use in European factories. Zilkha previously made a business out of harnessing wind energy, but this time it was going to produce a product that is literally one of a kind.

The process officially began in 2010 when Zilkha purchased more than $6.2 million in equipment in a bankruptcy sale 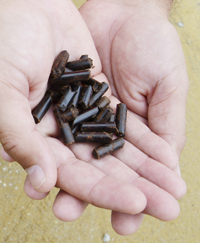 from a facility near International Paper’s Dallas County mill. The facility formerly belonged to Dixie Pellets, which produced a similar product, though Zilkha’s patented black pellet,reportedly produces more energy than a normal wooden pellet and is waterproof.

“When we are talking about pellets, just about everything that is produced is a white pellet,” said Zilkha spokesman Johnathan Ohueri.

Zilkha’s initial estimates were to bring 52 full-time jobs and produce as much as 275,000 tons of its material. The Dallas County facility would become main production site for the pellets, with a facility in Crockett, Texas — between Houston and Dallas — transitioning to a research role, Ohueri said.

Pellets aren’t commonly used in the United States to power factories or harness energy. In Europe, biomass, including wooden pellets, represents more than 8 percent of the total energy consumption, according to the European Biomass Association’s 2013 annual report. The report said the pellet industry has grown rapidly in recent years, amounting to 8 million tons in 2012.

In reality, Zilkha is one of many U.S. pellet industries. In fact, pellet plant announcements in the southern United States, led all other new biomass projects since 2010, according to the U.S. Industrial Pellet Association.

“The plant has been idle for several years, but a good bit of it has been preserved,” he said.

“Construction is really going to ramp up in July,” he said. “Our goal is to end up being done with construction by 2014 and hopefully start production soon after. We are certainly on schedule to hit our goal.”

“We will certainly need a trained workforce,” he said. “Because Dixie Pellets owned this site, we knew there was a workforce already in the area that we could take advantage of.”

He said the plant’s management would soon begin moving to the area, as construction nears completion. Current job estimates hover between 50 and 60 total workers, Mayhew said.

Though the company is still looking to hire dozens of personnel, the Zilkha site is a beehive of activity. Construction crews fill the site, from front to back, perhaps even equaling the total number of expected production jobs at the facility, Mayhew said.

He said another possible boost in available jobs, though indirectly, could come in forestry.

“We are currently recruiting through AIDT (Alabama Industrial Development Training) and are basically hiring people right now,” Mayhew said. “Besides just the direct plant jobs, there are going to be forestry jobs too.”

The increase in forestry jobs would come from a greater demand for wood products, Ohueri said. He said the plant isn’t picky about the type of wood needed to create its patented black pellets either.

“We are not required to use any specific part of a tree,” he said. “Our goal is to use as much of a tree as possible, typically targeting biomass that is not utilized by other industries, but also recognizing that silica and dirt are detrimental to our pelleting process.”

Ohueri said Zilkha can also use saw dust, trimmings and bark in its pellets. He also touted the environmental sustainability of the pellet, because trees can be replanted after harvest.

Areas closest to the Zilkha facility may see the most immediate demand for products, but Ohueri said demand for pellet components could include a 70-mile radius from its facility on Dallas County Road 888.

Selma-Dallas County Economic Development Director Wayne Vardaman stressed the importance of the indirect forestry jobs. At one point, Vardaman said the company estimated Dallas County’s plant would need 100 truck loads of wood per day. Zilkha’s production would be a small part of the overall market share of pellet production, but Vardaman said it could provide a significant economic boost for Dallas County once in full production.

If Dallas County’s plant goes into production in 2015, it would be one of more than 200 that are currently in operation, according to figures from the U.S. Industrial Pellet Association.

Though Zilkha is rolling toward it’s production date, the company hadn’t always planned to open a plant in Dallas County. After purchasing Dixie Pellets’ equipment at an auction, Zilkha had originally planned to move out of the area, Vardaman said.

“We put together a presentation about why [Zilkha] should locate in Dallas County and they ended up saying they would rather stay in the same location than move,” Vardaman said.

Other concerns centered around traffic at the Zilkha facility, which county government solved with a more than $500,000 road improvement project.

Originally, International Paper, Zilkha Biomass and the commission had concerns that if both industries shared the access road that runs to County Road 78, the congestion of traffic would be detrimental to the industries. The project included milling and repaving Dallas County Road 78 from Alabama Highway 140 to International Paper’s main gate and construction of two turning lanes.

Even before the Zilkha project, the Dallas County Commission paid $900,000 for a road to Dixie Pellets and International Paper to allow better access.

The Selma Times-Journal has again been named one of the top daily newspapers in Alabama. The Times-Journal earned second place... read more