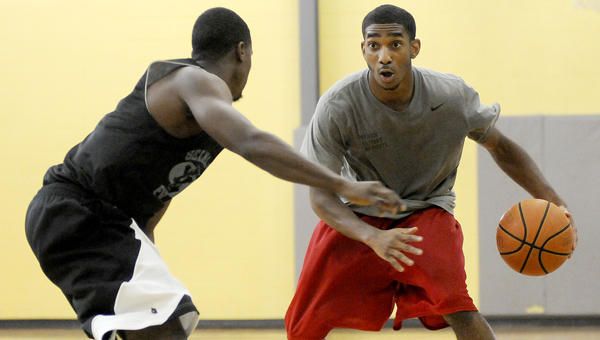 More than a dozen people crowded the Selma-Dallas County YMCA’s basketball court on Monday. The YMCA has gone through a number of changes recently after Ann Murray took over as its new chief executive officer. (Josh Bergeron | Times-Journal)

Now within the Selma city limits, new programs are in place and hundreds of new people have joined the Selma-Dallas County YMCA since Ann Murray took over as chief executive officer.

Murray took over as CEO in January. Since then, the YMCA’s membership totals have increased exponentially.

“I think that what’s happened is that we have a staff of people who know and understand Selma,” Murray said. “We are building programs that reach out to the community and people we have known our whole lives.”

In January, YMCA membership hovered around 800 total member units, which can represent more than one person. A single member unit could include a family, couple or individual, Murray said.

Now, the YMCA’s membership is more than 1,000 units — a more than 20 percent increase from the start of the year.

Murray said 275 total new member units signed up for a membership at the YMCA since the beginning of this year.

Perhaps part of the membership increase can be attributed to an increase in programs and improvement in facilities. The YMCA’s new programs include a summer adventure day camp, new playground surface, an after school program and even a swim team, Murray said.

The summer day camp allows parents to enroll children in YMCA program for one week or the entire summer. Murray said the facility averages 50 children per day.

Once school starts back, Murray is looking to start an after school program, which would be similar to the YMCA’s summer day camp.

“I am excited and encouraged about the steps forward that we have made,” Murray said. “We have lots of new members and the facility is clean and sparkling. My hope is that people’s needs are really being met.”

New programs and increased enrollment are only a one part of the changes at the YMCA. The facility recently moved into the Selma city limits after the YMCA board petitioned for annexation.

The Selma City Council approved its annexation during its June 24 council meeting.

Annexation doesn’t immediately mean any changes for the YMCA, but both Murray and Ward 2 councilwoman Susan Keith plan to build soccer fields to draw more people into the city for games and tournaments. Murray said a walking track could also be an important addition.

The YMCA receives a portion of the city’s hotel tax to help pay off debt, which is part of the reason for the annexation, Keith said during a previous interview with the Times-Journal.

“Why spend city money on something that is not in the city limits,” Keith said.

Fire-damaged houses can be seen all over Selma, and some have been awaiting demolition for years. This house on Lamar... read more