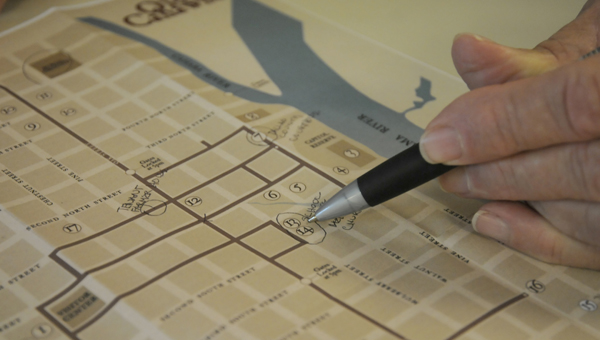 Jack Bergstresser, an archaeological interpreter at Old Cahawba, points to a schoolhouse and Methodist church to be viewed on Old Cahawba’s annual African-American Community After Emancipation tour Saturday at 10 a.m. (Sarah Robinson | Times-Journal)

ORRVILLE — Old Cahawba is giving the public a chance to explore black history Saturday with their annual African-American Community after Emancipation tour.

Starting at 10 a.m., Old Cahawba will explain the role once enslaved residents of Old Cahawaba and surrounding plantations played in reshaping Old Cahawba post civil war during the Reconstruction Era.

“Reconstruction is very important to Alabama history,” said Jack Bergstresser, Old Cahawba’s archaeological interpreter. “A lot of the events that laid the groundwork for the historical changes of the civil right movement began here early on, so we go to these sites where this early activity following the Civil War began to shape the direction the black community was heading down the road to the civil rights movement of the 1960s.”

During the one-hour tour, participates will view the Negro Burial Ground, where deceased slaves were buried, a one-room school house built by the black community, the Dallas County Courthouse where African-Americans registered to vote for the first time after years of being denied that right and other historical sites.

“It’s also just an opportunity to kind of opportunity to provide some insight to the daily lives of the black community in that period,” Bergstresser said. “We’re covering some territory that must people don’t think very much about.”

Selma’s Rev. Stephen Hornat has been elected to lead the Edmundites. According to a news release from Saint Michael’s College,... read more