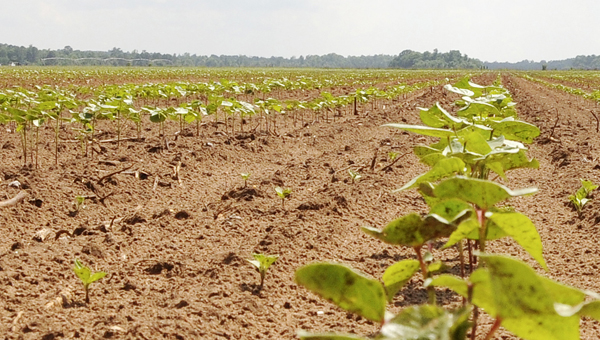 For the South, cotton has been a thriving staple crop for more than 10 decades.

Austin Allred, a junior at Auburn University and a local Dallas County cotton farmer, said it was because the South was generally a good place to farm cotton, thanks to the soil quality. 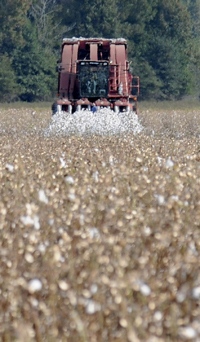 “Well, a lot of cotton is grown down around the river and out in Sardis where the ground is sandier,” Allred said. “It’s just really good for cotton farming. The water kind of stays off of it, and it tends to be more dry natured than the Black Belt.”

Lately, Cotton has been increasing in total output, according to the U.S. Department of Agriculture. In 2009, the USDA’s annual report showed 4,450 total acres of cotton harvested in Dallas County, which equaled 561 bales. The overall output steadily increased in following years from 6,450 acres harvested in 2010 to 10,300 acres in 2012.

Many have attributed the increase to significantly higher rainfall totals in the previous two years.

Farmers have different ideas about how to produce the best cotton crop. While some people may think the focus when growing cotton are how many bolls, or capsules, cotton can produce, Jay Minter, who has been farming cotton since he moved back to Tyler in 1995, said the focus was instead how farmers can control the height of the plant.

“We think about how high we want it to get, controlling that because that’s something we can control,” Minter said. “Ultimately our goal is how many pounds of fiber, how many pounds of lint, we can get per acre. We want to do whatever we can to reach that goal.”

For the average crop production of cotton, the objective is to produce approximately two bales, or an average of 1,000 pounds of cotton per acre.

“At least two bales is what I would want,” Allred said. “If we could get more, that would be great, but you’re making really good money if you’re getting two bales.”

For cotton the regular growing season is usually a four-month span from the first of May to the first of September.

“It’ll pretty much be done making cotton by the first of September,” Allred said. “It’ll start to lie down. The cotton bolls will start to open up on their own, but you can also spray something on them that will defoliate it, or gets all the leaves off. It even makes the boll open on up so you can harvest it.”

While most farmers aim to plant their seeds in the ground the first week of May or even the end of April, the growing season for Minter began later than he would have liked this year because of the colder-than-normal winter that lasted into the early spring.

“The soil never warmed up enough” Minter said. “We have to wait for the soil to get 60 to 65 degrees. It takes more than one 80-degree day in March to get the soil warm enough. It’s got to be warm day after day.”

By using a different strain of cotton, Minter said he was able to get his crop into the ground without being too far behind schedule and has even caught back up to where he would like to be in the growing season.

“We planted a shorter season variety that would come up, come quicker, make its crop faster,” Minter said.

A shorter season variety of cotton comes in handy for a season that gets a later start than normal, like this previous one for Minter. But while this year’s growing season was not as affected as it could have been, weather has greatly affected Minter’s crop in the past.

“Weather is the biggest thing every year,” Minter said. “Last year, for me, it was a little too much rain. My crop was just a little bit late. It got so wet and stayed so wet for so long that I got behind on a lot of things.”

While last year’s issue was too much rain, Minter recalled the 2007 growing season when a severe drought put a major stunt on that season’s production.

“The benchmark year for the older folks was ’60 or ‘61 for how bad a drought was,” Minter said. “They said, ‘there would never be another drought like that year.’ Well, even the older folks were surprised in ’07 with that drought. Normally, in the spring, we have frequent enough showers that we can stand it, but we had to pre-water to get the ground soft enough to plant. Water again to get the cotton to come up. Water it all the way through the growing season. We picked maybe a 100 pounds an acre.”

While a rain can affect a crop’s production, farmers have tried using different methods over the years to try and generate a profitable crop. One way has been to use genetically modified seeds.

“They are both round-up ready and herbicide resistant,” Minter said. “They have the BT [Bacillus Thuringienesis] gene. There are chemicals we can spray on the top that helps kill any weeds in a field of cotton. So we are able to use less herbicide and cheaper herbicide. It helps our crop thrive because there is less competition in the fields.”

The BT gene, Minter said, was focused on killing insects such as the bollworm, which can be any type of moth caterpillar that will feed on the cotton bolls.

“If we didn’t have BT cotton it would be our biggest insect pest,” Minter said. “They’ll get on the plant. They’ll eat a little bit of it, but because the plant has been genetically modified it’ll make them enter a reproduction cycle prematurely. Bottom line is we don’t have to spray for those bugs.”

But while the BT gene deters insect pests that could harm the growth of the plant, there is not much way to avoid what Minter says are a cotton farmer’s No. 1 nuisance: deer.

“Other than shooting them, we have no means to control them,” Minter said. “I’ll probably get a permit this year. I haven’t in the past, but it’s getting to that point.”

The deer ravage the young growth of cotton in field by eating much of the newly sprouted leaves. This not only stunts the plant’s growth but also will usually kill it.

“Their tongues have just gotten used to it,” Minter said “They like the taste of it. If they waited for it to get bigger, you can tell them ‘go for it,’ but they’re eating it so fast before it can grow. It’s just dead.”

While not only having to deal with the changing weather and animal pests, Allred said overall cotton was resilient.

“Cotton can sit there for three or four weeks without one single rain, and then you get one,” Allred said. “It’ll start making again and fruiting. It can come back and you can still make a good crop, even though it’s been sitting and not growing well for the past three or four weeks because it’s been so dry. It’ll try and catch back up and make.”

Cotton is also forgiving in the idea that a farmer could use the same field year after year to plant their crops instead of having to have a crop rotation schedule.

“A lot of this ground was in continuous cotton for 175 years,” Minter said.

While cotton may be a forgiving crop, it is not something just anyone would get into and begin growing, Minter said.

“You can’t just get into it,” Minter said. “The availability of land and the cost of equipment, you can’t just start into it on any scale. I was able to start because my family has been in it, and anyone my age or younger in the county, we all grew up in it. If you have some family land, learn as much as you can. Start reasonably small, and know it’s going to take a minimum of five years to know what you’re doing.”

Bama Budweiser: The King of Delivery