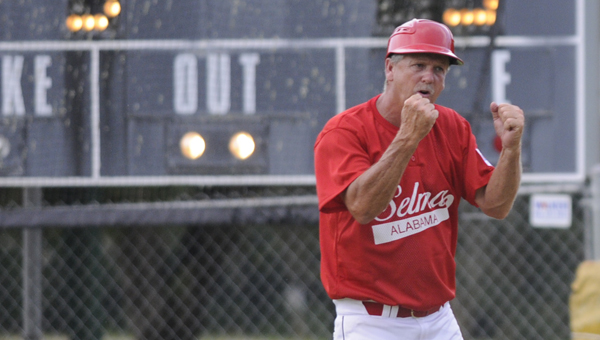 Selma head coach Scott Gunter reacts to a scoring play in his team’s game versus Thomasville Saturday night at Bloch Park. Selma won the game 13-4 to keep its season alive. The same teams will play Sunday at 4 p.m. at Bloch Park.–Daniel Evans

Selma’s pre-major all-stars fought through the elements for a 13-4 win that kept their season alive Saturday night at Bloch Park.

Rain was a common theme throughout the night, as precipitation forced a one-hour rain delay in the fifth inning, but even the storms couldn’t cool off Selma’s offense Saturday night in a game the team knew it had to have.

“We got ahead of them early and hit the ball a lot better tonight,” Selma head coach Scott Gunter said. “Our pitching was good tonight … and we scored some runs at a crucial time.

Thomasville won game one Friday night 5-3, meaning a win Saturday would have sent the team to Tuscumbia for the pre-majors state tournament in July.  Instead, the same two teams will play Sunday at Bloch Park at 4 p.m. in a winner-take-all contest.

Game two was all Selma.

By the time Miller Spivey singled in the third to score Wesley Gunter, the score was 5-0 Selma, leaving Bryant and Thomasville in a big hole early.

“He obviously had a lot of velocity,” Thomasville head coach Jerry Schreiner said of his pitcher. “They know that and they made him throw a lot of pitches, which is smart on their part.”

Bryant exited the game after three innings and Thomasville put in Reid Thompson to pitch, but even he couldn’t extinguish Selma’s hot offense. Woodham Keemer welcomed him with a bases loading triple in the fifth, padding Selma’s 10-2 advantage.

Then, Mother Nature decided to put her touch on the game. Hard wind, lightning and heavy rain saturated the field, forcing players to be taken off the field and resulting in a delay around one-hour.

The stoppage brought back painful memories for Selma, which lost to Butler in last year’s district tournament after blowing a big lead following a rain delay.

“We all know what it feels like [to lose it], so we know we want to win,” Scott said “… Especially after the way it went last year.

Selma made sure this year had a different result as Wesley Gunter doubled into right field in the seventh to extend the lead to 13-4.

Both teams now turn their attention to Saturday’s game, where the winner will move on to the state tournament.