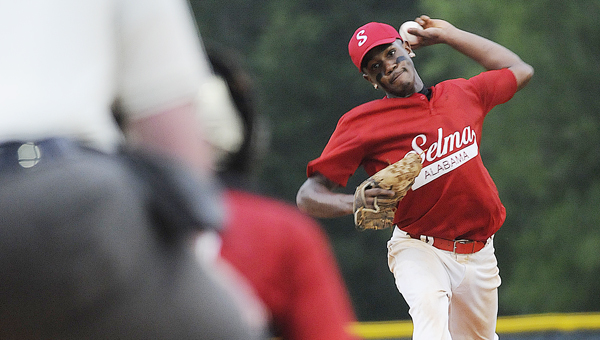 Selma’s Keyshawn Ford throws a pitch during Friday night’s pre-major district tournament game versus Thomasville. Selma lost the game 5-3, but the same two teams will play Saturday at 5 p.m. at Bloch Park in the second contest of a best-of-three series.–Daniel Evans

Selma’s road to a district championship in the Dixie Youth pre-majors division just got a little steeper.

Selma fell to Thomasville 5-3 Friday night at Bloch Park in the first game of a best-of-three series that will determine which team moves on to the pre-majors state tournament at Tuscumbia in July.

Thomasville broke a 2-2 tie with three runs in the fifth inning to put itself in the driver’s seat, while Selma struggled at the plate throughout the evening.

“We couldn’t hit the baseball,” Selma head coach Scott Gunter said. “I think we had three hits the entire game and you can’t win ballgames with three hits.”

Thomasville pitcher Jon Tyler Meggins shut down the Selma offense most of the game. Meggins first pitch of the game hit Selma’s Prince Tolbert in the middle of the back, resulting in a walk, but after that he seemed to be on cruise control. Meggins didn’t allow his first hit until the fourth inning.

“He needs to make it a little bit fun just to get started,” Thomasville head coach Jerry Schreiner joked. “But Jon Tyler has been pitching on the varsity for a long time and he is only in the tenth grade. He is a phenomenal pitcher and has been for a long time.”

Thomasville’s bats gave Meggins an early lead to work with with two runs in the first inning. Sammy Jackson scored on a passed ball and Adrian Malone followed with a single, giving Thomasville a 2-0 advantage.

Meggins seemed untouchable for the next three innings, but Selma finally broke through in the fourth when D.J. Stiles singled to left and later scored on a passed ball. Selma tied the game 2-2 when Ricky Austin scored when Woodham Kimmer grounded into a fielder’s choice.

Thomasville was unfazed, quickly taking control in the fifth when Zack Woodard singled to center field to score Sammy Jackson. Next, Nic Council scored on a sacrifice fly by Jesse Joyce to help Thomasville double its lead to 4-2. That would be all the runs Thomasville would need, but the team added one more on Adrian Malone’s single to left field.

Ford reached his pitch count on Malone’s single, ending a night where he gave up five runs  and five hits.

“He’s tough and pitches solid but tonight he was a little off,” Gunter said. “That’s the way it goes.”

With a storm moving in and the wind whipping across the field, Selma was able to add one more run in the seventh when Joel Taylor’s single scored Kimmer, but that would be all.

Now, Selma has to focus on Saturday’s game, which starts at 5 p.m. at Bloch Park.

“We’ve got to tell them to let it go because that game is over,” Gunter said. “We’ve got to come back and start over tomorrow and refocus, hit the baseball and be ready to play.”