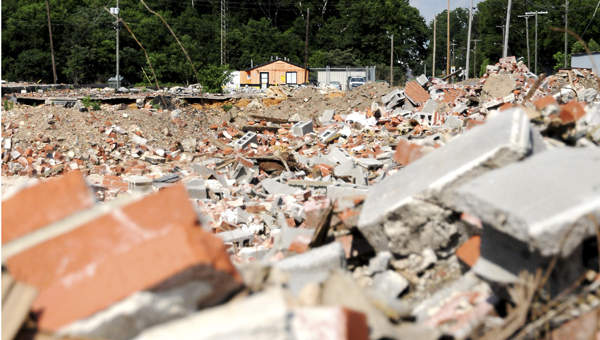 A cloud of theatrical smoke hangs over the Edmund Pettus Bridge during the filming of a scene for the movie “Selma” early Thursday afternoon. –File Photo

Selma city government approved one measure Tuesday and is preparing a second to crack down on dilapidated house demolition.

The first measure arose from a lack of progress at the former Stewart-King-McKenzie Building and requires contractors to be bonded before demolishing houses. Ward 8 Councilman Michael Johnson sponsored the ordinance, which passed unanimously Tuesday after the council suspended its rules.

“I told them that you are taking the city for a joke and my patience is running very thin,” Johnson said Tuesday about the lack of progress in cleaning up the Stewart-King-Mckenzie building.  “CVS tore down a church, a house on the side of it, cleared the land, built the CVS and opened for business. Stewart-King-Mckenzie started two months before CVS did anything and I still have bricks and sand on Selma Avenue.”

For projects under $5,000, city attorney Jimmy Nunn said contractors would have to provide a cash bond of $1,000. A demolition job that costs $100,000 would require a bond equal to the total cost of the project.

“If [contractors] do everything the building inspectors say, then they would get their money back,” Nunn said. “If you fail to complete the job, then the bond amount would be used to complete demolition.”

Nunn said the ordinance is designed to prevent buildings from remaining partially torn down after contractors begin demolition.

The second ordinance would apply once houses are completely demolished and debris is hauled off. It would raises fees from $75 per load to $300 per load.

Typically, city crews pick up debris after a house is demolished and haul it to a landfill.

In some instances, contractors fail to contact the city for debris pickup. The city picks up any debris and later charges contractors for the correct number of loads needed to clean the site.

Following the meeting, council president Corey Bowie said the fee has remained at $75 for several years. Raising the fee would bring Selma in line with other Alabama cities, he said.

The measure wouldn’t strictly be focused on generating revenue, as Bowie said a portion of the fee increase would pay for gas and travel costs to haul the debris.

“I don’t think the city should be in this line of work,” Bjelke said. “There should be a dumpster in place and let the private owner be responsible for dumping and hauling it off. At the same time, we can’t just leave rubbish hanging around.”