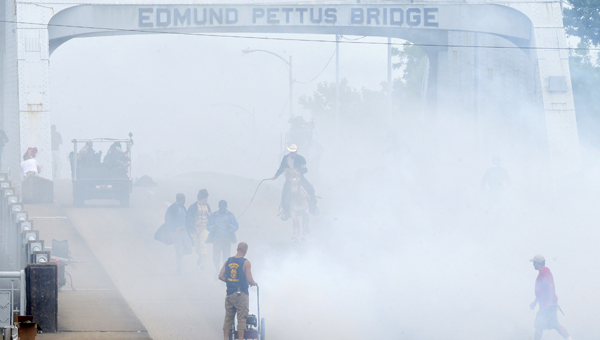 A cloud of theatrical smoke hangs over the Edmund Pettus Bridge during the filming of a scene for the movie “Selma” early Thursday afternoon. –Jay Sowers

By Scottie Brown and Sarah Robinson

After nearly a week of recreating Selma’s most well known historical moments, including the Selma to Montgomery marches of 1965, the production process in Selma concluded Thursday.

The filming experience for the movie “Selma”, produced by Oprah Winfrey and Brad Pitt, which is set to release Christmas day, has left those involved with lifetime memories.

“We’ve filmed pretty much everywhere, but here, for our director Ava [Duvernay], it’s been so touching and moving,” said Tiffany Barnes, the assistant location manager for Paramount Pictures. “It’s been a really serious matter.”

Thursday was amongst the most intense production days for the cast, Barnes said, as producers shot the Bloody Sunday scene. The scene re-enacted the first attempt made by hundreds of civil rights activists March 7, 1965 to march from Selma to Montgomery to petition for the right to vote. The march ended with participants being brutally beaten by law enforcement.

Among the Selma residents to appear in the movie as extras were several marchers who gave their personal accounts of the event. Barnes said they did not hesitate to provide input on how the movie crew could bring realism to those moments that shaped civil rights history.

“We’ve read up on all of the history,” Barnes said. “We’ve done all the homework, but there is something actually about being in that moment and talking to the people that were involved that gives you another perspective of what it was about.”

While production companies Paramount Pictures and Pathé have access to countless people willing to serve as extras, Barnes said they felt it was essential they have the Selma community get involved, since the movie tells the city’s story.

Lt. John Brock with the Selma Police Department worked as the operational officer for the department while the movie was being filmed in Selma.

Brock applauded the efforts of the production crew to include Selma residents in the movie.

“Yesterday, when they had the big crowd scene, I saw a lot of Selma people in the crowd as extras,” Brock said. “You know they don’t make that much, but it [isn’t] about the money. It’s about being in the movie.”

The citizens of Selma were not the only ones who got a taste of Hollywood. Thursday during filming, the Travel and Learn Touring Group stopped in Selma while doing a Civil Rights tour. The group had tourists from Maryland, Virginia and North Carolina.

Syreeta Smith, from North Carolina, said the group was disappointed they were unable to walk across the Edmund Pettus Bridge, but it was still an experience they would cherish.

“It’s amazing,” Smith said. “I was just so happy to be here to see the bridge that I’ve read about and heard about, and then to see that the movie is happening where they’re re-enacting everything is just exciting.”

Smith said experiencing the filming of the movie was like witnessing a piece of history being made.

“I feel like even this is a part of history, just getting to experience the making of this movie, because one day we’ll see it and say, ‘We were there,’” Smith said. “It’s incredible to see.”

Filming will continue Friday in Montgomery, followed by a trip to Atlanta, where the crew is scheduled to wrap up the movie by Tuesday, July 2.

Actors, extras and crew members have been working under the sun all week while filming the movie ‘Selma’. Above, a... read more