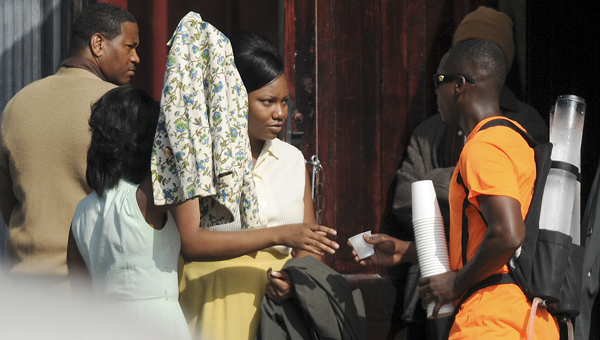 Actors, extras and crew members have been working under the sun all week while filming the movie ‘Selma’. Above, a crew member hands a cup of cold water to an actress Monday afternoon. –Tim Reeves

Summer heat can be tough to beat, but part of the crew for “Selma” is specifically assigned to provide refreshments. With heat comes the safety concerns of overheating and dehydration, but the hydration team has been working to make sure everyone stays well hydrated and cool while on set.

Shaphawn Adams, with “A” Team Craft Services, said the hydration team treats water as a necessity for safety.

The hydration team is made up of 10 members.

Several of them are equipped with backpacks filled with water and Gatorade to help dispense drinks to the cast and crew during breaks.

“We’ve got these really cool Ghostbuster-style backpacks,” Shaphawn said. “We’re just hitting the crowd, front, middle and back. The minute they call cut, we go.”

The idea for the backpacks came from Shaphawn, said her brother Javan Adams.

The backpacks are equipped with three different tubing sections and three nozzles.

“I can do one nozzle while background and the extras can do two other nozzles,” Javan said. “We can get to more people quicker with the backpacks.”

The hydration team not only has the backpacks to help keep the cast hydrated, but Shaphawn said production handed out small towels to keep the cast cool.

“They’re these little cool towels,” Shaphawn said. “The people that haven’t wanted to drink, we’ve just been wetting their towels with cold water, so they can kind of put them on their face or on their neck to help keep them cool.”

While heat and dehydration are an issue, Shaphawn said she was sure her hydration team had been doing a great job.

“The people that have been declining it isn’t because they aren’t thirsty,” Shaphawn said. “It’s been because they have to go to the bathroom so much, because we’re giving them so much to drink.”

Paul Garnes, an executive producer for the movie “Selma,” said a lot of thought had gone into how to protect the crew and extras including having medics on set during filming.

“We also had EMT’s that were on set with us who would help monitor everyone’s health and hydration,” Garnes said.

Robert Skelton, one of the set’s ambulance drivers with Alabama EMS, said the biggest thing for the cast and crew to do was to drink liquids.

“All they’ve got to do is keep hydrated,” Skelton said. “They have to be conscious of themselves. If they stop sweating, that’s bad. They know when they’re overheating.”

Actor David Oyelowo, center, who is playing Martin Luther King, Jr. in the movie ‘Selma’, walks through a crowd of... read more