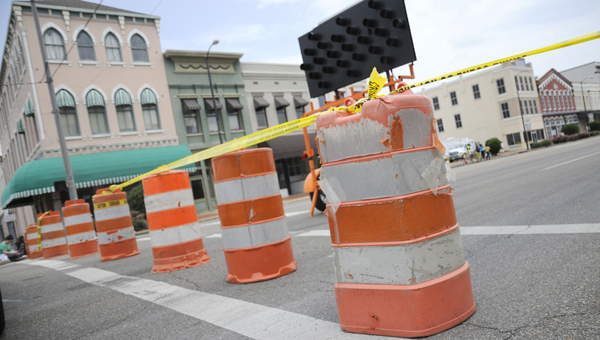 Portions of Water Avenue and Broad Street, as wells as the Edmund Pettus Bridge were closed as the filming of “Selma” began Monday. (Christopher Edmunds | Times-Journal)

Just like every other Selma resident, firefighters and police officers are adapting to the road closures due to the filming of “Selma.”

Filming began Monday in Selma and will end on Thursday, June 26. As filming continues, the Edmund Pettus Bridge will close at 5 a.m. each day and reopen at 9 p.m. each night.

Selma Fire Chief Michael Stokes said the closure of the Edmund Pettus Bridge may be a small inconvenience, but it has not affected response times for the Selma Fire Department.

“In a nutshell, it has no impact,” Stokes said. “We can always use the bypass if needed, and fire station No. 2, directly across the bridge, can respond normally.”

Stokes said while the bridge is closed for filming, the fire department will still have access in emergency situations.

“If it’s a life or death emergency, then we would still be able to get across that bridge,” he said. “We just don’t disturb them with anything routine.”

Selma chief of police William Riley said the police department has spread out personnel to make up for the lack of bridge access.

“We’ve had no major changes,” Riley said. “We adapt to make sure we have people on both sides of the bridge, but things have been pretty good so far.”

Riley said the police department recognizes the inconvenience, but residents should be patient and think of how the ends justify the means.

“It is an inconvenience with the road closures, but it’s for a good cause,” he said. “This is something that doesn’t happen everyday. Who knows? Maybe next time when they need a small-town setting, Selma will be an option.”

Pebble Davis, a Selma resident, takes a picture of several of the vintage State Trooper cars brought in for the... read more