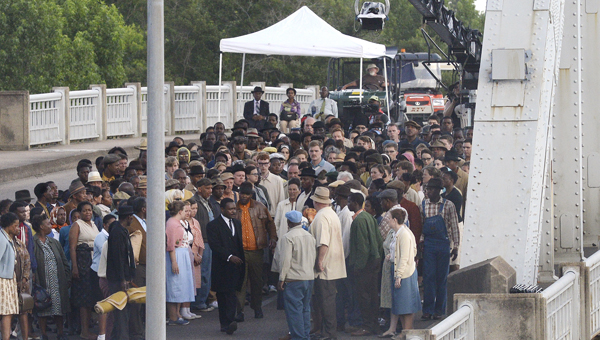 Actor David Oyelowo, center, who is playing Martin Luther King, Jr. in the movie ‘Selma’, walks through a crowd of extras during filming Tuesday on the Edmund Pettus Bridge. (Jay Sowers | Times-Journal)

The filming of “Selma” has affected several local businesses in various ways.

The production crew’s direct effect on businesses deals mostly with access for potential customers. With the Edmund Pettus Bridge closed during the day and parts of Water Avenue and Broad Street blocked off, some businesses have seen a decrease in traffic.

Jim Creech, owner of Pilcher-McBryde Drug Co., said the lack of access impacted the store on Monday, but it started to pickup again on Tuesday, when some barricades on Broad Street were removed.

“It had an impact on our business,” Creech said. “We were not as busy as we normally would be. It was better than I expected, though. It has been much better now that our parking on Broad Street is available.”

Creech said the delivery portion of the business was inconvenienced, but not seriously affected.

“Our delivery was slower because the driver had to adjust for the bridge and park farther from the store,” he said.

Some businesses in downtown Selma struggled Monday due to public perception.

The windows on Sherie Leigh Ousley’s Broad Street store, The Lily Pad, are currently dressed with blue curtains that cover up most of the glass. The signs for the store have been replaced with old fashioned prop signs as the building has appeared in some of the filming.

Ousley said she has been asked several times if The Lily Pad is going out of business because of how the store looked Monday.

“For me, there was no point in even opening Monday,” Ousley said. “People were saying that all of downtown was closed, asking if we were closing for good and if we were actually selling the stuff on the prop signs in the windows.”

Ousley is among several business owners who said they would have appreciated more communication with the production crew and the city.

“I would like for someone to tell me when they are going to be done, so I can take the curtains and props out of my window,” Ousley said.

Doris Butler Truax, with Butler Truax Jewelers said she would have liked to have known the exact dates for filming earlier to plan advertisements and sales around the production.

“This is the last week of our big inventory reduction sale, and we haven’t had a sale like this in 20 years,” Butler Truax said. “We were planning on this being the biggest week of the year, and they almost shut us down Monday. I’m glad they’re here, but they said they would let us know when they would do all of this, so we went ahead with all of the advertising, thousands of dollars of advertising, and it wasn’t even a typical Monday.”

While some local businesses have struggled during the production of “Selma,” others have thrived.

Towanda Gibson, owner of the Sweet Advantages ice cream shop on Broad Street, said the extra business from the cast and crew of the movie has made up for the lack of access for regular customers.

“It’s been awesome,” Gibson said. “They’ve been using Sweet Advantages as a headquarters to cool off and buy drinks. The director even sent out an email, encouraging everyone to come and buy ice cream.”

Gibson said she has had to adjust for the boost in business, but it has been easily managed.

“I’ve had to stock lots more ice cream,” she said. “It’s not as big as Jubilee, but it’s still a big order.”

The filming of “Selma” is expected to continue through Thursday.

Downtown Selma returns to 1965 for filming of ‘Selma’

Above, actor Wendell Pierce, center in black coat, is portraying Hosea Williams in the movie “Selma,” currently being filmed in... read more