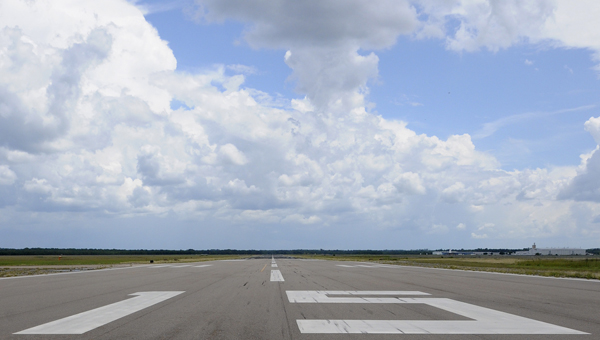 The runway striping and markings at Craig Field, shown here in a 2012 photograph, have recently been repainted. ( File Photo | Times-Journal)

Craig Field is changing its stripes.

“We have got a lot more traffic out here now,” Driskell said. “All that activity wears on your markings and stripings.”

He said visible runway striping is especially important at night, as planes come in for landing.

The restriping is scheduled to begin in late August or early September and wrap up within 60 days.

The restriping is the latest in multiple different improvements for Craig Field.

In January, Craig installed an automated weather observation system at a cost of approximately $180,000. The system provides basic weather data for pilots, such as wind speed, visibility, sky condition and precipitation.

Shortly after the installation, fixed base operations manager Richard Cook talked about the usefulness to pilots.

“The system provides everything a pilot might need to figure out what the weather in Selma is like,” Cook said in January.

Driskell said the airport is currently also in the midst of an upgrade to its precision approach path indicator lighting, shortened to PAPI. The lighting helps pilots visualize the runway on approach.

“We want to be the best airport we can be,” he said.

“When they came in, they saw the amenities that we had and said, ‘Wow, we should have known about this place before,’” Driskell said.

Celebrating the fun of reading