Downtown Selma returns to 1965 for filming of ‘Selma’ 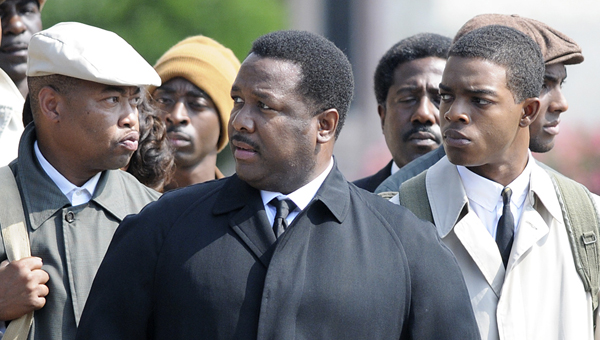 Above, actor Wendell Pierce, center in black coat, is portraying Hosea Williams in the movie “Selma,” currently being filmed in downtown Selma. At right is actor Stephan James, who is portraying U.S. Rep. John Lewis. (By Tim Reeves | Times-Journal)

With stop lights removed and multiple roads closed to traffic, “Selma” began filming Monday morning, with actors dressed as if they had time traveled from the 1960s.

Shooting began on Water Avenue, at its intersection with Broad Street. Actors walked from the former Harmony Club, across Water Avenue and up the Edmund Pettus Bridge, retracing the steps of John Lewis and Josea Williams on March 7, 1965.

The crew took a brief break around noon and moved its film equipment onto the Edmund Pettus Bridge.

While taking a brief break from filming, director Ava DuVernay expressed excitement over being able to begin filming in Selma.

“There’s nothing like putting a camera on something for the first time,” DuVernay said. “We are thrilled to be on actual sacred ground and there’s deep meaning here for the whole crew as we walk around. Filming it for the whole world to see is an honor.”

She continued, saying the experience of filming the Edmund Pettus Bridge for the first time was a deeply chilling experience.

“No matter how many times we walked over the bridge scouting and preparing, when you see it on camera, literally we got goose bumps,” DuVernay said. “To see the extras in their period costumes, it’s hard not to get emotional and focus on the work.”

Though temperatures were toasty, DuVernay said the weather wasn’t quite as hot as expected.

Though most of the attention on the first day of filming was centered on the actors and cameras, police officers sat a few hundred feet in every direction to close roads to traffic.

“We are making sure that we can be accommodating to the film crew to make sure that whatever they need we can put in place for them,” Riley said. “We want to make sure they have the opportunity to film what they need to film in the time that they can film it because we understand that weather can be a problem. And, the biggest thing I tell my people is that everybody has got to be flexible and understand that shooting a movie is a fluid situation.”

Filming will continue in Selma on Tuesday and end on Thursday, June 26. As filming continues, the Edmund Pettus Bridge will close at 5 a.m. each day and reopen at 9 p.m. each night.