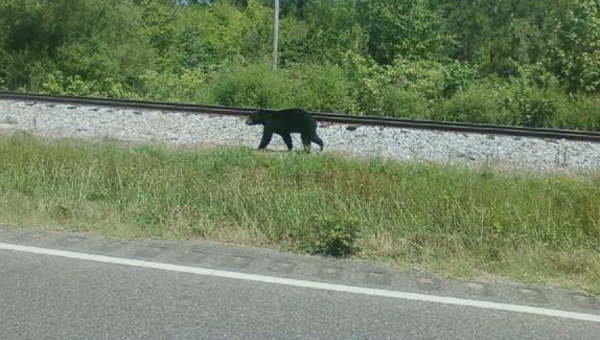 A black bear was seen walking down Highway 22 in Orrville Monday, giving several motorists an unexpected sight during their commute. Experts said the bear is likely travelling north after leaving the state’s largest bear population, which is located around the Mobile and Baldwin County areas in the southwest corner of Alabama.–Submitted Photo

ORRVILLE — Keith High School, located in Orrville, is known to be home of the Bears, and now we know why.

A black bear maneuvered its way to town Monday and was photographed walking along the road parallel to the railroad tracks that lead into town, giving motorists an unfamiliar sight during their commute down Highway 22.

“That’s definitely not typical bear behavior,” Daniel Powell, coordinator of the Alabama Black Bear Alliance, said after viewing a photo of the animal.

Powell said the bear rummaging through Orrville was probably a young male that has been set free by his mother, who is probably prepared to breed again.

“They disperse the male offspring. They run them off,” Powell said. “… All that little male bear knows is momma doesn’t like him anymore, so he travels looking for another bear.”

Powell said nobody knows the exact number for sure, but he estimates that there are over 1,000 black bears in the state of Alabama. He said most of the black bears in Alabama are located in the southwest corner of the state and walk from the panhandle of Florida into Alabama or come into the state from Tennessee.

Perhaps the bear travelling through Dallas County Monday knew what it was doing, as it did walk into a town in Orrville where the high school’s mascot is a bear, but Chris Cook, a wildlife biologist for the Alabama Wildlife and Fisheries Division, said it was probably just looking for companionship.

“Typically they will move on,” Cook said.
“… If they were to make it into a city like Selma they may show up in dumpsters or something, but out in a rural area like Orrville, they are not going to cause much trouble. They will travel through. They may be around for a couple of weeks and then you won’t see them again.”

Cook said it’s rare to get a call about a bear travelling through this area of the state, but it isn’t completely unheard of either.

“We usually get two or three calls a year,” Cook said. “Typically we will get one coming from that northeast Alabama population and then maybe a call down in Dallas County or Marengo County from that southwest population. It’s not something that you are going to see every year but it is not completely unheard of to see them travel through that part of the state. It’s not surprising but it’s not commonplace.”

What would be more rare is if the bear stayed put instead of moving on, Cook said. More than likely, Cook said the bear is looking for another group of bears to live with and will continue moving on until he does.

Those that encounter the bear should not fear for their safety, Cook said. In general, black bears are regarded as shy creatures and a large portion of their diet, up to 95 percent, comes from plants.

“They are like most wild animals,” Cook said. “Unless you corner them or make them feel threatened, they aren’t going to bother you. They are going to try to get away as much as a deer would or anything else.”

Cook said if one does see a black bear, they should leave it alone and do their best not to provoke it.

“If it’s in your backyard, the best thing is stay in the house until it leaves because it is unlikely that it is going to stay there,” Cook said. “If it’s around someone’s house, it’s probably going through garbage or some other food that is available.”

A Southside High School football coach talks with some of Southside’s players during last year’s 7-on-7 scrimmage. Southside will a... read more