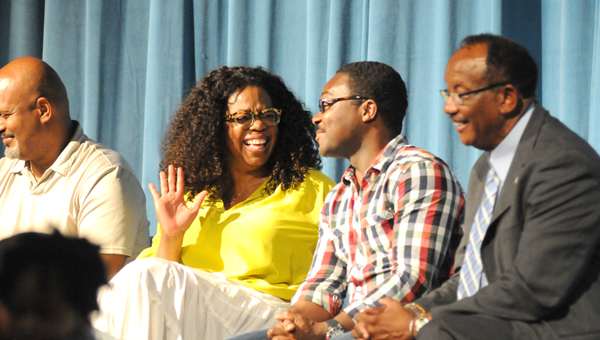 At first there was applause, then came cheers and, by the time Oprah Winfrey walked on stage at Selma High School, the crowd erupted in jubilation.

Winfrey was one of four “Selma” cast and crew members that answered questions Sunday about the film during a town hall meeting at the high school’s auditorium.

Selma Mayor George Evans was even a little starstruck as he introduced the cast and crew.

Some residents questioned why the film hadn’t devoted more of its time to filming in Selma, rather than in Georgia. DuVernay said Georgia provided the independent film with large tax credits that don’t exist in Alabama, which was part of the reason.

Winfrey also talked about her choice to play Annie Lee Cooper in the movie. Cooper is well-known for hitting former Dallas County Sheriff Jim Clark in 1965.

Prior to her confrontation with Clark, Cooper stood in line for hours outside the Dallas County Courthouse to register to vote. Clark ordered Cooper to go home. Cooper clamed Clark poked her in the back of the neck with either a club or a cattle prod. Cooper turned and delivered a swift right hook to the sheriff’s jaw and he dropped to the ground.

“I didn’t want to choose Annie Lee Cooper originally because I haven’t really done that many films, but the films that I have done are pretty memorable for slapping people,” Winfrey joked. “I decided to do it because of the weight of the history that Annie Lee Cooper carries. She represents what it meant to stand in line and be denied, not once, not twice but over and over again. When she hit that sheriff she didn’t just hit him for herself, but for everybody who had been frustrated and didn’t want to take anymore.”

Winfrey said she was also persuaded by Oyelowo and DuVernay to take the part.

Winfrey joked about the decision to choose Oyelowo as Martin Luther King.

“Excuse me, but god told me that I was supposed to be Martin Luther King,” she said. “So, it must be that you’re not going to be the director.”

Oyelowo said that Winfrey and DuVernay, once she became involved, ultimately chose him to be Martin Luther King Jr.

Throughout the town hall meeting, the cast and crew members repeatedly stressed the movie’s historical significance and symbolism in the voting rights movement.

“The amazing thing is that what happened here, in Selma, between January and March, led to the law changing five months later,” Oyelowo said.

The movie officially began filming Monday, focusing mostly on downtown Selma. It wraps up filming in Selma on Thursday, June 26. “Selma” is scheduled for a December 2014 initial release. It’s nationwide release is scheduled for January 2015.