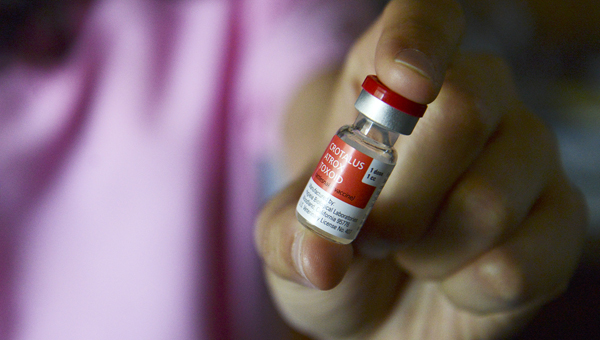 As temperatures rise and more pets join their owners outdoors, the number of domesticated animals bitten by snakes usually increases.

This year, however, two local veterinarians have said the increase in bites has been anything but slight.

“Last week alone we saw three dogs that had been bit,” said Dr. Frances Kendrick, of Valley Creek Veterinary Hospital. “And we have so many kinds of snakes here that there is hardly time throughout the year where there aren’t snakes roaming around.”

“We’ve probably had more to this point this year than we did at this point last year,” Wood said. “We had two in one day this week.”

While both veterinarians offer anti-venom shots, which can be administered after an animal is bitten, they both recommend a vaccine booster shot every six months.

Wood said he recommends the vaccine, not only because it can help limit the damage done by snakebite, but also because it costs far less than the anti-vemon.

“There is the vaccine, which is something to try to prevent a bite from being a big problem, and there is anti-venom,” Wood said. “And the anti-venom is what can be given to counteract of the bite. The problem with anti-venom is that it is extremely expensive.”

While the vaccines cannot prevent a dog from suffering a snakebite, and they aren’t effective against all snakes found in Alabama, Kendrick said she has seen plenty of dogs who are alive because they received the vaccine booster.

Kendrick said one dog she has treated for numerous snakebites over the years, an inquisitive 5-year-old Rottweiler, was able to survive the attacks thanks in large part to the vaccines.

“In one instance, this dog grabbed a large rattlesnake further back from the head than it should have, and it was bitten four times on its head. That attack should have killed this dog,” Kendrick said. “But we were able to treat him for infection, and he didn’t have any tissue loss.”

Wood said not all dog owners need to worry about vaccinating their pet, especially if the animal is primarily an indoor animal.

“Not all dogs need to be treated. If you have a tiny little thing that sits on grandma’s lap all day, and doesn’t even go outside to the bathroom, she’s probably going to be OK,” Wood said. “But a dog that lives outside, like a hunting dog, or any dog that tends to wander around, we would suggest getting the vaccine.”

By Christopher Edmunds The Selma Times-Journal   The unemployment rate for Dallas County increased in May, but more people were... read more