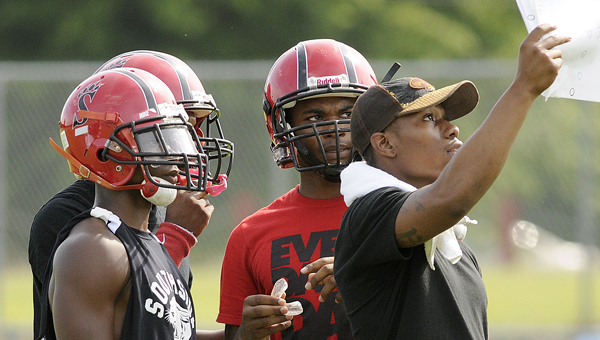 For football teams, summer is a time to see how well your team is fairing against others.

Southside High School is hosting their first 7-on-7 of the summer Tuesday, June 24, and head coach Daniel Flowers said he is looking forward to it.

Southside will host Ellwood Christian Academy, Keith High School, Greenville High School, Hillcrest High School in Evergreen and Dallas County High School.While the teams will get a chance to play against each other, Flowers said a 7-on-7 scrimmage is not entirely based on a real-life game.

“It doesn’t translate to a football game, because we don’t have a line,” Flowers said. “You don’t have a defensive line, so it’s not real.”

But Ellwood Christian’s head football coach, Eric Martinear said the scrimmages were good for seeing where your team stands as a whole and what you need to work on in order to get better.

“We will be able to tell where we are as a team from the stand point of are we doing the little things right, playing our routes correctly, identifying formations defensively and things like that,” Martinear said.

This will be Martinear’s first year coaching at Ellwood.

Martinear, like Flowers, said the scrimmages were not entirely realistic, but for a different reason.

“I think it’s good for the kids, but it’s not realistic,” Martinear said. “It doesn’t mean just because we lose in a 7-on-7 that this team can beat you when it comes to it in a regular season.”

While the 7-on-7 scrimmages might not be realistic, Flowers said they were something the athletes could look forward to and are a good way to break up the monotony of just working out.

“I know they get tired of working out all the time and I don’t have [anything] else to do,” Flowers said. “It gives them a chance where they can work out and see where we have or haven’t gotten any better.”

The 7-on-7 scrimmages are also a way for coaches to see how athletes will react given different situations, Flowers said.

The teams will face each other Tuesday, June 24 on Southside’s football field and Flowers said ultimately it was about having a time to compete, but winning or losing did not matter.

Hayden Roberts shakes hands with his opponents after a tough 10-0 loss at the Dallas County Sportsplex Friday night. By... read more