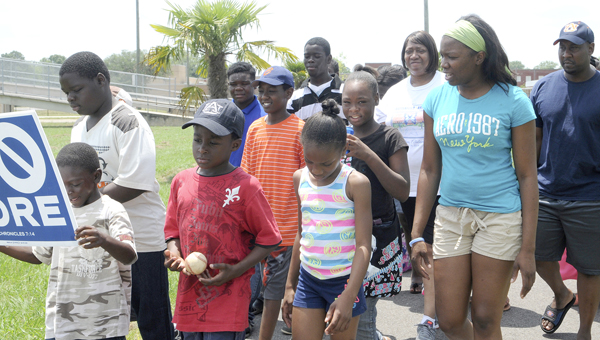 Friends and family gathered together Saturday afternoon in remembrance of Alexis Hunters’ passing in December. Saturday marked 6 months since she had been killed. (Scottie Brown | Times-Journal)

Friends and family of slain Selma High School student Alexis Hunter gathered Saturday just a few hundred feet from the spot where she was murdered to remember her life and personality.

Joann Hunter, Alexis’s mother, was one of several family members who gathered at the trail behind Selma High School, said that although six months has passed since her daughter’s death, the pain of her loss remains.

“Once I got out here the rest of my family members had got the word that I was out here walking,” Joann said. “I guess they were worried about me, and they came on out.”

Alexis was murdered Dec. 21, 2013 after two teenagers, John Jones and Larry Hunter, reportedly shot and killed her at the intersection of Franklin Street and Memorial Avenue. Joann said time has not made the loss of her daughter any easier to deal with, although friends and family — and her faith — have helped.

“Sometimes, I don’t think I can go on, but by God’s grace,” Joann said. “When he took her life he harmed a lot of folks, a lot of family, because Alexis was a jewel. She was a jewel for the family. He didn’t only take her life. He took a lot of our lives with it.”

Alexis’ cousin, Cassandra Bailey, said it had been hard dealing with the loss of a cousin so close to her; a cousin she considered a sister.

But Bailey said she had been finding ways to deal with the loss.

“I usually try and talk to her and tell her that I’ll be alright and tell her just back off for a little while and let me deal with it on my own,” Bailey said.

Alexis’ father, Howard, offered advice to those in the community.