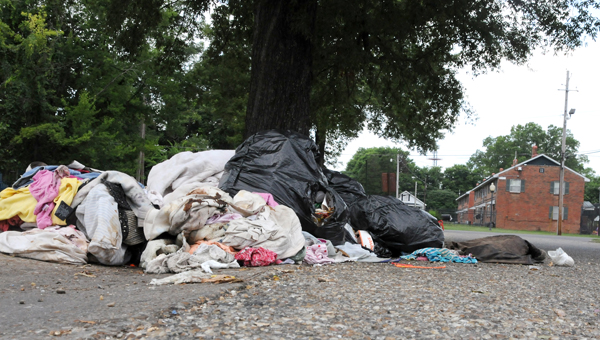 Trashy streets: Garbage and discarded clothes sit on the side of a street Saturday near GWC Homes. City officials have talked about the garbage problem in Selma frequently and contemplated ways to address the problem. (Josh Bergeron | Times-Journal)

Throughout Selma, dozens of city streets, both in neighborhoods and along main thoroughfares, are littered with trash. Some street debris is limited to food wrappers and plastic bottles, while large piles of garbage flank other streets.

City officials are hoping that a June 30 code enforcement meeting can help clear up any questions about garbage, dilapidated houses and any other topic related to keeping Selma in tip-top shape.

The meeting will be at 6 p.m. Monday, June 30 at the Carl C. Morgan Convention Center.

“We have some people that just don’t care about living in a clean environment,” Evans said. “It seems like they just throw litter anywhere.”

He wasn’t the only one. Ward 4 councilwoman Angela Benjamin also addressed the issue.

“When did we get so trashy,” Benjamin asked. “When I was growing up, if you dropped it, you picked it back up.”

Council members said part of the issue could stem from Selma residents not paying for residential garbage pickup, and instead finding other places to throw trash.

Technically, it’s illegal for garbage to sit in public view on residential property, according to the city’s code of ordinances. Code enforcement or a fire inspector can issue a citation for violations, the code states.

In at least one instance, Selma residents left garbage on the outskirts of New Live Oak Cemetery.

Regardless of the particular location, council president Corey Bowie said the blame can’t be entirely laid on code enforcement or city government to clean up the problem.

“It’s also the citizens along with city government that have some responsibility,” he said.

Thanks to a nationwide shopping center more underprivileged Dallas County residents will have access to food.  Walmart announced Thursday in... read more