Veterans of World War II the focus of annual event 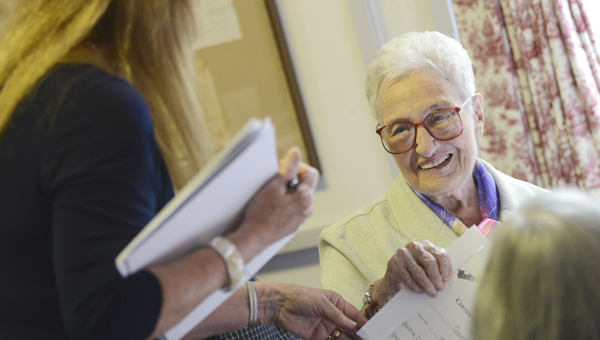 World War II veteran Geraldine Vaden receives a certificate of appreciation from the United Daughters of the Confederacy Selma Chapter 53. The UDC chapter held an event Wednesday to honor area World War II veterans. This is the third year the organization has held such an event.

Who better to read from the pages of history than those who wrote the stories found there?

Hosted by the United Daughters of the Confederacy Selma Chapter 53, the third annual World War II Honor reception was held Wednesday to gather WWII veterans together and give them a chance to recount their experiences.

Pat Godwin, president of the UDC Selma Chapter 53, said the annual event is the most important event the group holds throughout the year because it gives others a chance to hear the veteran’s stories
in person.

“I don’t invite a guest speaker or World War II historian to come and speak. The best history is right in here. The history is what they lived, and it’s best we hear it from them,” Godwin said. “Everybody that wants to is invited to speak.”

This year’s event drew 28 WWII veterans, double the 14 who had attended the event both of the previous years. Godwin said she had searched for veterans in neighboring counties this year.

“I located about 75 World War II veterans this year. We expanded our search this year to include Chilton, Perry and Wilcox counties,” Godwin said. “I am finding out about more and more local veterans every day.”

Geraldine Vaden, who served in the Army Nurse Corps in Italy and North Africa during World War II, said it is almost therapeutic to enjoy small talk and a meal with others who served during the war.

“I think it’s great to have something like this, because there aren’t many of us left,” Vaden said. “I love to be here with the other veterans. We’re all in the same boat and we have been through so much.”

Wilcox resident Roy Childers was just 17 years old when he visited Craig Field to sign up for the Army Air Corps. It would be a year before he got the call that would send him on a 16-month adventure, during which he trained to fly military aircraft.

Luckily, Childers recounts, he never had to see the battlefield.

Childers said his fondest memory of the war would always be the way the country came together after Japan attacked Pearl Harbor on Dec. 7, 1941.

“It’s hard for people to visualize the attitude of everybody in this country after the Pearl Harbor attack. It was amazing,” Childers said. “And living today, each story we can tell helps illustrate how different it was back then.”

The Dart: Winston’s hard work is paying off

Antonio Winston, 31, rakes clippings as his coworkers cut and trim the lawn of a client. Editor’s note: The Dart... read more