The Dart: Winston’s hard work is paying off 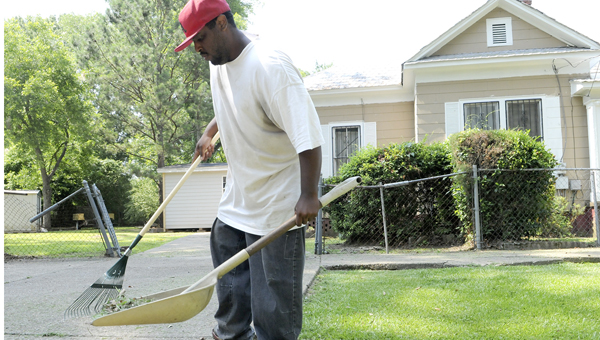 Antonio Winston, 31, rakes clippings as his coworkers cut and trim the lawn of a client.

Selma resident Antonio Winston, 31, is no stranger to hard work. Over the years, Winston has worked several tough blue-collar jobs.

While doing landscaping work Wednesday in a subdivision off of Marie Foster Street, Winston said he has come a long way.

“I dropped out of Selma High School at 16, and at that time in my life I was just messing up,” Winston said. “But I turned my life around at the age of 20 because I was tired of doing nothing with my life.”

Winston earned his GED and started working at various factories in Prattville and Montgomery, including a now closed brake plant.

Eventually, Winston was convinced by family members to get a commercial drivers license and take to the road. While driving for a major company, Winston dealt with several challenges.

“It’s expensive to eat on the road,” he said. “You normally spend about $12 per meal, and it’s usually not healthy.”

Winston said the long hours also took a toll on him.

Winston currently works with a landscaping company, cutting grass all day in the summer heat. Winston said the work is tough, but he’ll never complain about it.

“I have no reason to complain,” Winston said. “It keeps money in my pocket, and it’s a way to keep me off the road. These days, because it’s so tough to get a job, it’s not about what you want to do; it’s about what you can do and what’s available.”

Winston said the landscaping work also keeps him active during the summer, when business is booming.

“My diet is pretty bad, so staying outside and working like this keeps me busy and in shape,” he said. “The heat does take it out of you, though. On the weekends, I’ll stay inside and watch sports, but I like the work. I’d rather be outside and work with my hands than sit in an office all day.”

After more than 10 years of hard work, Winston said his family makes it all worthwhile.

“Once you have kids, it changes everything,” he said. “Back when I was 16, it was just me. Now I’ve got two kids and a girlfriend, so I need to provide for them, and I’ll do whatever it takes.”

John T. Morgan Academy is seeking new leadership. The school’s board of directors announced Wednesday that Martha McKnight is no... read more