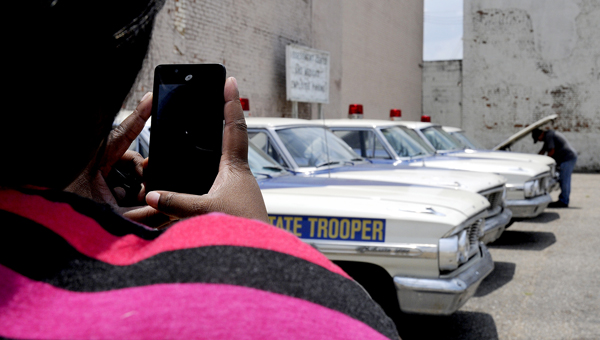 Pebble Davis, a Selma resident, takes a picture of several of the vintage State Trooper cars brought in for the production of the movie ‘Selma,’ Wednesday afternoon.

While the casting call for extras to participate in the movie ‘Selma’ had more than 500 people come to audition last Tuesday, more are needed to play the parts of white marchers, priests, police officers and agitators, casting director Cynthia Stillwell said.

“I’m looking for someone who could play that they’re in the army. Someone who is in very good shape, very small, because these uniforms are very rigid,” Stillwell said.

She also described the people she would need as athletic, but not built, and in good shape.

Stillwell said casting is also looking for those to play white agitators.

“What they are, are the people who are definitely on the other side of this march, but they are white,” Stillwell said. “We are asking them to portray that because there’s no battle without it. You have no sides.”

Stillwell said it would be optimal to cast the extras from the Selma and Montgomery areas.

“I want to book from Selma and Montgomery,” Stillwell said. “Because that’s our goal, but we have to make sure we have it very quickly.”

Anyone interested in being cast in the movie should send a headshot, contact information and wardrobe sizes to selmaextras@cynthiastillwellcasting.com

The fitting for the movie will continue Thursday. Filming in Selma is set to begin Monday. Stillwell said whatever time an extra could give would be appreciated.

“We would love to have them all next week in Selma and in Montgomery, but if they can only give us a couple of days that’s OK too,”
Stillwell said.

Though spots still remain for extras for the movie ‘Selma,’ places around the city are already going through a time warp in preparation for filming.

“It’s very interesting, since not a lot of movies have been shot in Selma,” said Pebbles Davis, a Selma resident. “It’s a great experience for Selma.”

Some of the vintage decorations include 1960s era State Trooper cars and vans representing the WBRC-TV Birmingham news station.

Mark Friedberg, the production designer for the movie, said that most of the filming and scenery changing would be done around the Edmund Pettus Bridge.

“We’re not so much seeing the town of Selma. Most of the stuff will be done on the bridge,” Friedberg said. “The movie is the story of all of the effort that went into allowing that march to happen, and the impact of that march politically.”

The movie is currently filming in the Atlanta area, but will begin filming in Selma Monday.

Friedberg also said the crew had an advantage when working with the city of Selma because many of the buildings and the architecture of the time have remained intact.

“Selma, actually, unlike some parts of the world, a lot of it is as it was,” Friedberg said. “Maybe the paint isn’t the same or the colors aren’t the same, but architecturally it’s pretty close. It’s very good for us as the art department.”