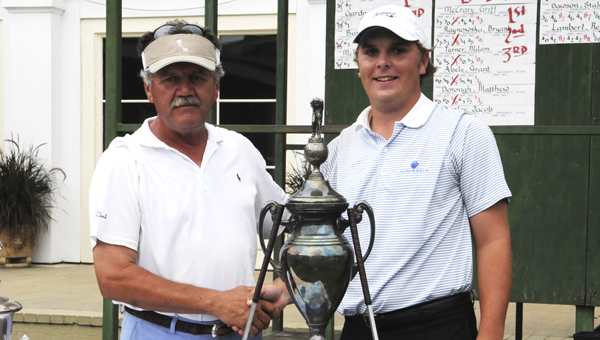 “The tournament was a little up and down at points,” Lorenz said. “I even hit a ball into the parking lot at one point.”

Overall, Lorenz said the tournament was enjoyable, and he thanked those involved in the organization.

“I really enjoyed the course. It really suited my game,” Lorenz said. “This is my first overall win, so it’s probably my biggest win so far. It felt good because the hard work finally paid off.”

With a total score of 219, the Gulf Shores native edged past local favorite Ford Manderson by two strokes. Manderson won the tournament in 2012.

At the age of 18, the 2014 tournament was his last chance to reclaim the title.

Manderson finished first in his age group with a final total of 221 strokes, but fell short in the overall competition.

Although he was beaten by two strokes in his final Bud Burns Championship, Manderson said he is still proud of how he finished.

“I played good enough to win, but not overall,” Manderson said. “I made two stupid mistakes, but I’m still proud of how I did. This is still a good way to go out.”

Manderson said he plans to attend The University of Alabama next year, but not to play golf at the varsity level.

Tommy Burns, PGA professional at Selma Country Club and organizer of the tournament, said he was rooting for Manderson in his final Bud Burns Championship.

“I was pulling for him. He’s local, and he’s been over here since he was 4 years old,” Burns said.

With the three days of competition completed, Burns said the tournament was a success.

“The tournament was fabulous this year,” he said. “You’ve never seen a better bunch of kids, and it couldn’t have gone better.”

Free scored an 82 and an 84 in his two rounds to finish second in his age group, but his character and sportsmanship helped him earn the Paul Grist Trophy.

“Paul Grist was always about helping underprivileged kids and teaching about citizenship and character,” Burns said. “This year’s winner of the award exemplifies hard work and citizenship.”

Free said the Paul Grist trophy was an honor he did not expect to receive.

“It feels good to win this trophy,” Free said. “It was a fun tournament.”

The sixth grader from Morgan Academy said he has competed in the tournament for three years, and he hopes to continue his success by winning the tournament soon.