Retention rates on the rise at WCCS 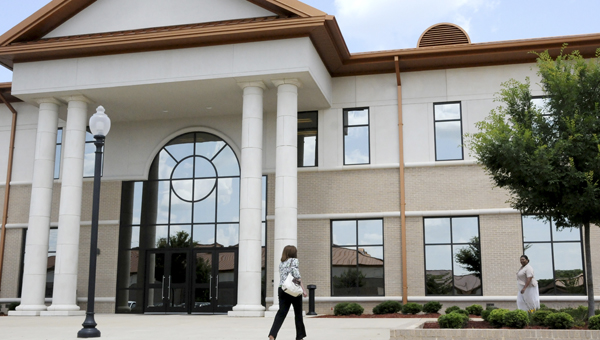 Wallace Community College Selma saw a 30 percent increase in the 2013 to 2014 in its retention rates over the 2012 to 2013 academic year. The rate increase means that more students returned for the spring semester. (By Josh Bergeron | Times-Journal)

Students are coming back to class more frequently at Wallace Community College Selma.

WCCS President James Mitchell announced this week that overall student retention rates were up 30 percent in the 2013-2014 school year over previous years. Mitchell said the increase is primarily concentrated in the school’s nursing and welding programs.

Retention rates are measured in several different ways, The 30 percent increase means that more students returned for spring semester classes when compared to the 2012-2013 school year.

WCCS Dean of Students Donitha Griffin said the increased retention rates are a positive sign for both the school and students.

“It means that more students are returning to eventually graduate,” Griffin said.

Mitchell attributed the increase to a program — officially named Partnership for Accelerated Learning through Visualization, Engagement, and Simulation —offering coaches or counselors to the school’s students.

Gloria Simmons, one of the Wallace’s coaches, said the program helps students cope with a myriad of issues to ensure good grades and ultimately prevent drop outs.

“As I coach, I am their cheerleader,” Simmons said. “My goal is to figure out how it impacts where [students] are trying to go and how can we work on that main goal they are trying to achieve.”

She said the most common issue is often transportation. Students often talk to coaches about arranging rides to school, Simmons said.

Other issues can range from social problems to getting tutoring for difficult subjects.

“The primary goal of a coach is to make sure that students are successful in whatever goal they set,” Simmons said.

And, with higher retention rates, Mitchell said the Selma community could benefit economically in the future.

Refunds are given when the amount of scholarships or grants received exceeds the total amount of tuition and expenses charged for WCCS.

“That’s money that the students are now able to go spend,” Mitchell said.

He said the students also have a chance for higher paying jobs with a degree or certificate from Wallace.

“Some of them even end up making higher salaries than me,” he joked. “One thing we have to understand is that our students are not only competition against each other, but competing globally.”

VALLEY GRANDE — The Valley Grande City Council is in the process of applying for grants to help pay for... read more