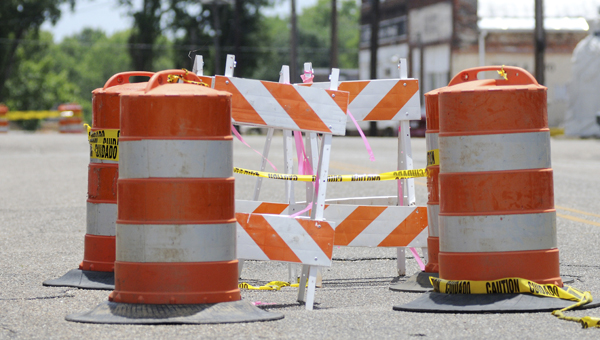 Months after a storm drain collapsed underneath Bienville Park and the intersection of Alabama Avenue and Lauderdale Street, a third depression formed last week across from the Dallas County Courthouse.(By Josh Bergeron | Times-Journal)

For the third time since December, a storm drain underneath Lauderdale Street has collapsed. Problems with the storm drain began in December when a sinkhole formed in Bienville Park. One month later, a second depression in Lauderdale Street formed South of its intersection with Alabama Avenue.

City engineering consultant Ray Hogg said all three collapses occurred on the same storm drain line. The actual cause of the collapse is unclear, Hogg said.

“It’s just an old clay pipe,” he said. “More than likely it’s 100 years old. Over time that pipe can become very brittle. It wouldn’t take much of a bump or shift in the ground for it to crack.”

After learning of the third collapse, Selma Mayor George Evans instructed Hogg to get quotes from local contractors about the price of fixing both remaining problems — at the intersection of Lauderdale Street and Alabama Avenue and across from the Dallas County Courthouse. Contractors fixed the Bienville Park collapse in May and Ward 3 councilman Greg Bjelke is working on landscaping the area.

Hogg said two options exist for fixing the two remaining collapsed portions of road. The most economical solution, he said, would be to fix sections of road immediately surrounding the collapses. A second, more expensive solution would require the entire storm drain to be replaced.

“It’s going to have to be fixed one way or the other,” Hogg said.

He said the more expensive option could cost more than $100,000, with the other likely costing significantly less.

Without seeing the pipe’s condition first hand, Hogg said it’s unclear whether the collapse spreads further north — to other portions of the storm drain — or whether the problem is localized to a specific area.

With three recent collapses, Bjelke said he hopes the problem is easy to fix.

“I know that it’s all connected, but I’m hoping that it’s a problem that’s easy to fix,” he said. “Let’s just hope for the best and hope that it’s not a serious problem.”

A Dave’s Market cashier checks out a customer Monday. The grocery store is part of a complex that’s seen increased... read more