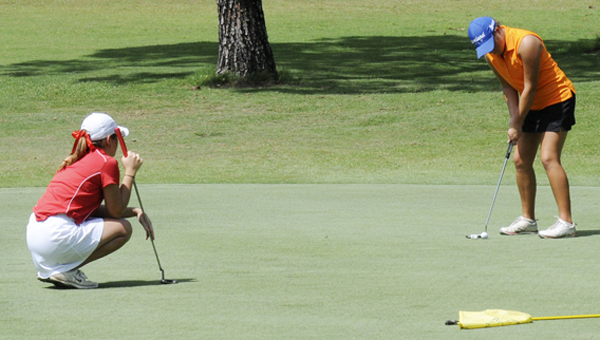 Sarah Battye, left, watches Ashton Maddaloni, right, get ready to take her swing on hole seven during the first round of 53rd Bud Burns Dixie Junior Golf tournament at the Selma Country Club.

The 53rd Bud Burns Dixie Junior golf tournament began Monday morning at the Selma Country Club with the first round of 18 holes for the girls.

Bill Wilcox, the executive director for the Alabama Junior Golf Association, said that the tournament is a way to compete against different people and to get your name out there.

“You get tournament experience with players that are from all over the state,” Wilcox said. “Plus, a few of the neighboring states, so you’ve got a strong field. Getting a good finish at this tournament, that can really get the attention of some college golf coaches, and a lot of these players are looking to play college golf.”

Like many of the other golfers participating, Sydney Turner, from Montgomery, returned to play in the tournament. Turner said this was her third year at the tournament, and that she had gotten better each year she played.