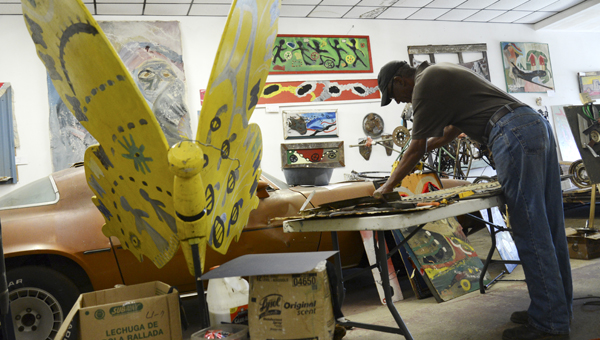 Charlie ‘Tin Man’ Lucas works on his next piece of art in his Broad Street workshop. — Jay Sowers

Reclamation is the one obvious theme that can be seen in the works of Selma artist Charlie Lucas, more commonly known by his nickname ‘ Tin Man.’

For Lucas, however, the process of recycling and reclaiming only begins with the materials used in his pieces.

“I get people from every walk of life who want to walk through here and see what I am all about, and take time for everyone because I want to be able to show people how to recycle themselves,” Lucas said. “Life is about reinvention and recycling. That is what my work is all about.” 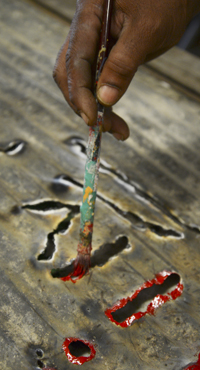 Lucas’ Broad Street studio may by the largest physical manifestation for his love of all things recycled. Before it became the home of his studio five years ago, the structure had previously housed a candy factory, a bingo parlor and had been used as a storage facility.

When others saw rusted metal and bare walls, Lucas saw so much more.

“When I first walked in here I said it was perfect,” Lucas said. “Other people were looking at the appearance of the building, but I was seeing the bones of the building and I knew it was everything I needed.”

While the building is full of hundreds of his paintings, sculptures and other finished artistic creations, the building is alive. Fresh drops of paint are easy to find near his working area, and the sound of a power drill is anything but rare.

Whatever the primary materials may be for any one piece — painting, sculpture or other — the basic theme is reclamation. The pieces are created largely from scraps of metal, wood and fabric Lucas has found and repurposed over his life.

While visitors of all ages pass through his studio on a regular basis, Lucas said he most enjoys interacting with school children.

“Kids are blown away when they come in here, not just because of the pieces I make, but also by the things I make them out of. I use broken pieces of glass or tile. They can relate to that,” Lucas said. “I want them to not just look at a piece and know what it is about, but also to consider how it relates to their life. I want to show kids how to recycle themselves.”

For Lucas, recycling oneself means to take the lessons and experiences of everyday life and to use them to discover who one truly is and to find their niche in the world.

“When I tell a kid to learn how to recycle themselves, I’m trying to tell them that after they have finished their education, they need to find their place out there in the world,” Lucas said. “I have worked on jobs just to learn them so I could use that knowledge down the road. If someone has a job they don’t like, I hope they learn that job, and can use that knowledge to find something better and to be something better.”

Speaking to several dozen high school students at his studio in early May, Lucas was asked about money and its importance when students are considering a job or occupation.

Seeing the price tags besides the works for sale at his studio, a student asked if money was why he created art. His answer was emphatic.

“This isn’t about the money. If you count your money and say you have a great wealth, that’s not true,” Lucas said. “You don’t count your wealth with money. You count it with knowledge.”

Lucas said the unpolished nature of his artwork has made it more accessible to children.

“I hope that the rawness of my work can explode something in their minds,” Lucas said. “I haven’t made any of this to look pretty. Every piece here is an assemblage.”

For some, Lucas’ works not only speak to them, they also reveal much about his character and personality.

“Charlie’s work has much optimism and hope embedded in it,” said Selma Art Guild president Jo Pate. “Only an optimist could take what others perceive as junk and turn it into art.”

Pate said each of Lucas’ works display some aspect of the artists’ infectious personality.

“His art is a reflection of his personality,” Pate said. “It is bubbly and outgoing, and colorful and creative.”

Lucas said he enjoys hearing the interpretations others, especially children, have for his artwork, because each interpretation is so different and reveals something about the one viewing the artwork.

“This is the seed of the crop right now. I’m trying to plant a new seed into these kids. I want to teach them something new,” Lucas said. “After people see my work, I want them to go beyond what they know.”

Visitors of all ages are invited to tour Lucas’ studio, he said, as long as it is understood the art is there to be interacted with.

“I enjoy all groups as long as they understand this not a place where you are supposed to walk in and not touch anything,” Lucas said. “You can touch the pieces here. I want people to find their way into the pieces and learn something about themselves.”

Lucas said the ability to be creative in expressing one’s true self and emotions is increasingly important for younger generations who are spending more time on computers and video games.

“Kids now are more willing to work more with their hands, because when they are done playing a video game and they turn it off, it’s done. It’s gone,” Lucas said. “But, what you do with your hands never shuts down.”

Lucas said his messages of recycling oneself and expanding one’s creative horizons are not only a wish he holds for his audience, but things he aspires to in his own life as well.

“I’m out to recycle myself for the rest of my life,” Lucas said. “There is no end to that project.”

A dining table has been placed where the dining room was originally located when it was the Jewish social club.... read more