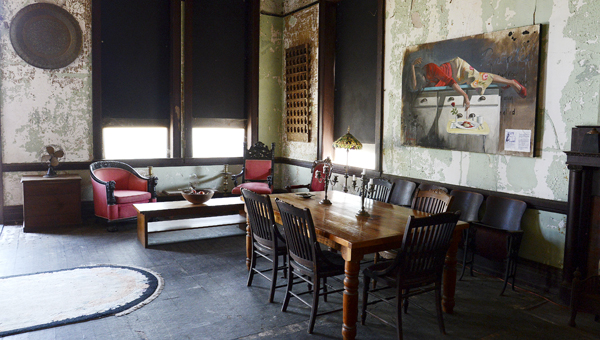 A dining table has been placed where the dining room was originally located when it was the Jewish social club. Later it became the Elks Grill, located in what was then the Elks Lodge. — Jay Sowers

Like the city of Selma, the iconic Harmony Club has seen its share of history over the years.

Fourteen years after he bought the Neo-Venetian style building, owner David Hurlbut said it was the details of the architecture around every corner of the building that attracted him to the property.

“When you walk through the front door, its clear this is a special place,” Hurlbut said. “You can just tell it was a building of importance at one time. There are nuances and details in every room that tell you this was, and is, an important place.”

Layers of history have accumulated in the Harmony Club since it was built in 1909 to house meetings of a local Jewish social club. It then served as an Elks lodge between the 1930s and 1960s before the Elks moved out and the building sat vacant until Hurlbut opened the front door in 2000.

Hurlbut said he knew little about the building’s history when he became the owner and even today there is more to be learned.

“I didn’t know the history back then like I do now, but I knew it had an intriguing history. It has taken me some time to understand the continuity of this place.” Hurlbut said. “I’m still doing historical research and finding new historical photos.”

Before he found the Harmony Club, Hurlbut had searched the South for a building, and a city, that had exactly what he was looking for.

“I wanted a building with historic architecture and I wanted a town with a lot of history. And it’s got a lot of renaissance revival aspects to it, and I love that Venetian aspect. If you’ve ever been to Venice, it looks like it belongs in Venice.” Hurlbut said. “And I’ve said it before, but along with its history, Selma feels like an inland Charleston, Savannah or New Orleans, and that’s very appealing to me.” 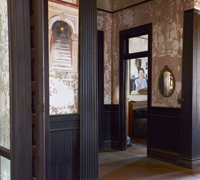 Along with being a home, the building houses a third floor ballroom and an Italian restaurant on the first floor.

“When I first bought the building, I always wanted there to be a restaurant in that space. It just looks like a restaurant,” Hurlbut said.

With one half of the first floor devoted to The Vineyard Italian restaurant, which opened in 2012, the other half is home to an architectural antique store Hurlbut opened this spring.

Hurlbut has worked hard to revive the building while preserving several layers of the history. In leaving flaking paint and 100-year-old light switches on the walls, one feels like they are walking through the Jewish social club or Elks lodge.

For Hurlbut, the majority of his first 14 years in the Harmony Club have been spent on updates to the building that don’t catch the eye of the passing pedestrian.

“There is lots of work that’s been done that you can’t see. We have all new plumbing, all new electrical work. We just got a new roof,” Hurlbut said. “They aren’t the biggest hassle with a building like this, but there are a lot of repairs that aren’t so sexy and visible, but they’re important.”

While it has taken countless hours of hard labor to modernize the building’s amenities and inner systems, Hurlbut said it makes more sense than leveling the structure and raising a new one.

“All the other cities I know that are trying to come up are faking this kind of architecture,” Hurlbut said. “They are trying to reclaim what we have an abundance of here in Selma. What we have in huge chunks and are tearing down, other cities are copying while they can. So, I think it’s important, not only for history, but from a purely monetary and business stand point, that we keep these buildings maintained and usable.”

Hurlbut is not alone in this sentiment. Jewell Williamson, president of the Selma-Dallas County Historic Preservation Society said current Selma residents owe it to the builders of the town’s historic buildings to preserve the old structures.

Williamson said the work Hurlbut has done at the Harmony Club is example of saving a historic Selma structure.

“What David’s done with the Harmony Club is terrific,” Williamson said. “And there are so many properties in downtown that are just sitting there, waiting to see a similar resurgence.”

Hurlbut said he is confident there are others in Selma who think like him and are willing to save the historic structures found throughout the city.

“I am hopeful for the city. For me, I think there are enough people in this town who want to see this kind of stuff saved,” Hurlbut said. “There are so many buildings in this town that are waiting to be bought and brought back to life. But there is a big difference between talking about something and doing something. I think doing something means getting in there, and being willing to do some hardcore clean up.”

After years of labor and renovations, Hurlbut still seems outwardly giddy when asked about the endless work that lies ahead still at the Harmony Club.

“My ultimate goal is to just keep restoring it,” Hurlbut said. “It’ all about bringing it back to life and making progress.”

Smedley: An advocate for Selma