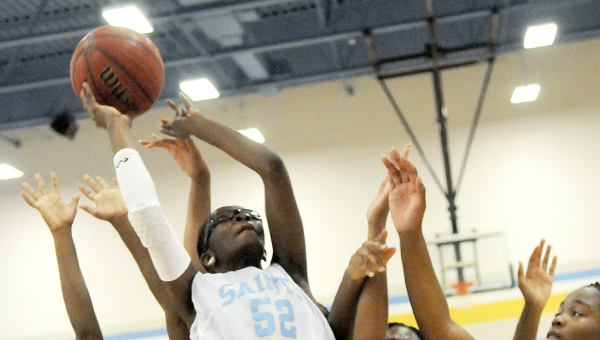 One day after the boys basketball teams met for a summer play date at Selma High School, it was time for the girls to take the court.

A total of 12 teams met in the Selma High School gymnasium to play several short games throughout the day.

The 30-minute games were divided in two 15-minute halves with a running clock.

Most high schools in attendance took the chance to field younger players and build team chemistry.

“This is the first time we’ve ever had a summer program,” Roberson said. “I think it’s going to be a good boost for the program because it gives us a chance to build team chemistry that we normally don’t have.”

In the first game of the play date, Southside struggled to produce on offense in a low-scoring contest against Booker T. Washington.

Senior Yasmine Mixon scored the first basket of the game after nine minutes of play.

Mixon’s two points were the only points scored by the Lady Panthers in the first half, as the team went into the break down 6-2.

It took another 11 minutes of game time before Southside scored again, this time from Calvandrea Blackmon.

The loss for Southside ended with a final score of 13-4.

Bothwell said this year will be the first year for the Lady Panthers to implement and run a full offensive system.

“We’re going to work on becoming offensive-minded,” he said. “With the system, they have to realize where they are on the floor, where the good shots are and when to pass the ball.”

Bothwell also said he would focus on training each of his players to become an offensive threat to opponents.

“This year, I’m trying to make sure that everybody on the floor can score, so we don’t depend on one person,” he said.

The Selma Lady Saints hit the ground running against Booker T. Washington in the first game of the day for the Saints.

The Saints scored early and often, with plenty of contributions from younger players.

The scoring started with a breakaway lay-up from Jac’quetta Dailey after a stolen pass. The trend of broken passes resulting in Saints breakaways continued throughout the 30-minute contest.

Multiple Selma found their way onto the score sheet, but Areyana Williams led the Saints, scoring a total of eight points.

The game resulted in a convincing 32-9 win for the Saints.

Selma basketball coach Anthony Harris said he was pleased with how the team played when they took the court for the first time together.

“Overall, they did a pretty good job,” Harris said. “A lot of them haven’t been together over the summer because of volleyball or other sports, so we’re trying to build that chemistry.”

Harris said the summer play date served its purpose because he was able to see some areas to focus on in future practices.

“Overall, we looked pretty decent,” he said. “We are turning the ball over, making silly passes, but all of it can be corrected as we continue to work.”

Selma started three freshmen in the game against Booker T. Washington, and Harris said the future is bright for his young players.

“We lost three seniors last year, so they’re a young bunch,” he said. “I think we’ll be alright in the near future with this group.”

The Keith Lady Bears fought a tough battle with Tuscaloosa’s Central High School, but eventually lost by a score of 29-21.

Keith struggled to execute on offense throughout the first half. Errant passes resulted in several breakaways for Central High, and the first half ended with the Lady Bears down 19-9.

Ambreya Snow held everything together for Keith by using her speed and passing to organize several scoring opportunities in the second half.

Although Keith put together a productive 15 minutes of play, Central kept the lead out of reach, and the game resulted in a loss for Keith.

Keith head coach Cecil Williams said although there were several mistakes made in the first game, the play date was valuable for the team.

“The game was good, but we had some turnovers,” Williams said. “The main thing is trying to get the girls to work together, work on our system and get some conditioning in for the summer.”

Like many of the 12 schools in attendance, Keith fielded a young team. Williams said he was proud of how the team played and is looking forward to developing his players.

“We have a young group, and we’re trying to see how the kids will develop next year. I’m pretty proud of them,” he said. “We’re missing a lot of players from last year, but I think we’re going to be strong.”

Teams come together for pre-season scrimmage