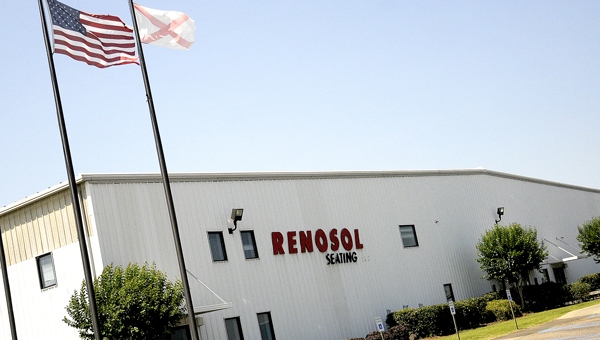 Renosol, located in Craig Field’s industrial park is scheduled for a union vote on June 19 and 20. If more than 50 percent of the employees vote in favor, Renosol employees could form a union under the United Auto Workers. (Josh Bergeron | Times-Journal)

Editor’s note: This article has been amended from a previous version to clarify how Renosol’s products are produced.

After a month of investigation for alleged health and safety violations, employees at Craig Field’s Renosol plant are preparing to vote on unionizing as a chapter of the United Auto Workers.

The unionization vote, scheduled for June 19 and 20, requires a simple majority of the plant’s approximately 90 employees vote in favor of unionization. The plant produces foam for Hyundai car seats. The foam first travels to Renosol’s parent company the Lear Corporation, where the seats are made, before being put into Hyundai car seats.

The vote follows efforts to unionize a Volkswagen plant in Chattanooga, Tenn., and a Mercedes-Benz plant in Vance as a part of the UAW.

Both state and local government officials have expressed concern that unionization could negatively affect business and economic development in Alabama.

“The UAW has clearly signaled their national strategy,” Canfield said. “With their numbers dwindling, they are trying to find other avenues to grow their role. We are concerned about an expansion of union representation in Alabama or in any neighboring state.”

Canfield and others say low union presence and Alabama’s status as a Right to Work state are frequent considerations when attracting new industry. Right to Work laws guarantee that no person can be compelled, as a condition of employment, to join or not to join a union, nor to pay dues to a labor union.

“We know that just purely from an economic growth and development perspective, states that enjoy lower union activity have historically been at an advantage,” Canfield said.

Renosol declined comment after employees delivered a list of grievances to upper management in mid-May, referring all questions to Lear, which operates several facilities in America that are unionized.

Lear spokesman Mel Stephens said the company doesn’t have a particular position on unionization, saying employees have a right to choose.

“We work well in union and non-union situations,” Stephens said. “We are prepared to work with both.”

The effort to unionize focuses on several different issues, primarily health and safety concerns. The list of grievances specifically cited the chemical toluene disocyanate, more commonly shortened to TDI. The chemical is toxic for both short- and long-term exposure, according to the Environmental Protection Agency.

A few days after employees voiced complaints, Lear began an internal investigation into the claims. The Department of Labor’s Occupational Safety and Health Administration also opened an investigation of the Renosol plant.

With OSHA launching an investigation, Auburn business professor Hebert Jack Rotfield said Renosol and Lear have an incentive to be honest in reporting any wrongdoing, but could also be motivated to correct any problems before being cited by OSHA.

Other employee concerns include temperature fluctuation and unfair pay practices.

“It might be 90 degrees outside, but it’s be even hotter inside,” Irby said.

Renosol’s pay practices were previously the topic of a lawsuit filed in 2009. The suit alleged employee’s overtime wages went unpaid. Renosol and the employees settled the case in 2013. U.S. Judge Kristi Dubose approved the settlement in February, which awarded three former employees a total of $142,334.59, according to court documents.

UAW representatives in Selma declined to comment on the record about involvement in Renosol’s unionization. National UAW representatives issued a statement saying “There’s credible evidence that workers’ health continues to be in danger at this Hyundai plant. It’s no wonder they’re joining together.”

“The unions are going to tell employees that they can get a better deal, and there is nothing wrong with that, but it’s up to the employees to decide which way they want to go,” Baldwin said. “It’s important for the employer to recognize when employees are reaching out, when there is a breakdown and employees feel like there is nowhere to go.”

Baldwin said unionization efforts shouldn’t be analyzed as a bad omen for the rest of the state’s auto manufacturing industry because circumstances often vary.

“The employer is faced with a situation where they have to prove it still has a positive environment without the third party,” Baldwin said. “In any situation, what is most important for me and what will always be [important] is employees. That’s the group of people that may feel like they aren’t being fairly represented.”