Businesses, individuals take care in presentation of the American Flag 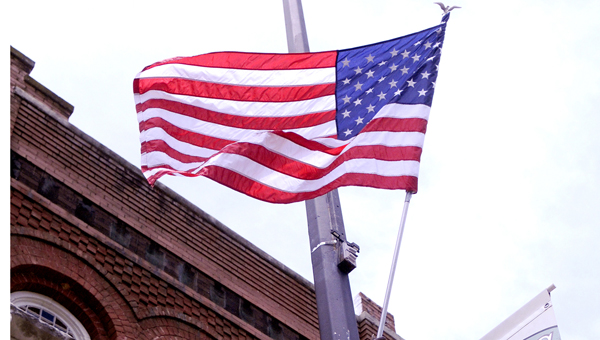 Ledell Tanner, a public works employee, mounts an American flag to a lamppost on Broad Street in preparation for Flag Day. (By Sarah Robinson | Times-Journal)

The American Flag will be on full display throughout Selma, as the nation marks Flag Day Saturday.

Flag Day is celebrated on June 14 each year in commemoration of the official adoption of the flag of the United States in 1777.

In a way of marking the day, the city of Selma ordered flags placed along Broad Street, as they do with Fourth of July, Memorial Day and other notable American holidays.

Ledell Tanner, with the city’s public works department, spent part of his day Friday mounting the flags along Broad Street.

“The flags look nice once we have them all up,” Tanner said. “We do this for all the major holidays, and I think it looks good.”

“We’ll raise the flag at 9 a.m., and everyone is invited to come out and join us,” said American Legion Post 20 member James Tineman said.

Some local businesses, like Goo-Goo Express Wash on Broad Street, take pride in their display of the American Flag.

Glynn Stewart, general manager of the car wash, said the flag the business displays is one of the largest in town.

“It’s a 30-foot flag on an 80-foot pole,” Stewart said. “We leave it up all the time, because it’s an all-weather flag. When it starts to get tattered, we’ll replace it.”

Stewart said the company replaces their flag about once a year, and a flag that size costs anywhere from $800 to $1,000.

Jack Ginter, vice president of development with Goo-Goo, said the company makes a point to install flagpoles at most of its locations.

“We don’t have one at every location because of certain restrictions by municipalities. We don’t like putting them up unless they’re big,” Ginter said. “It’s all about supporting those men and women who serve us each and every day.”

Aubrey Larkin Jr. has been named the new principal of Selma High School. (By Sarah Robinson | Times-Journal) For the... read more