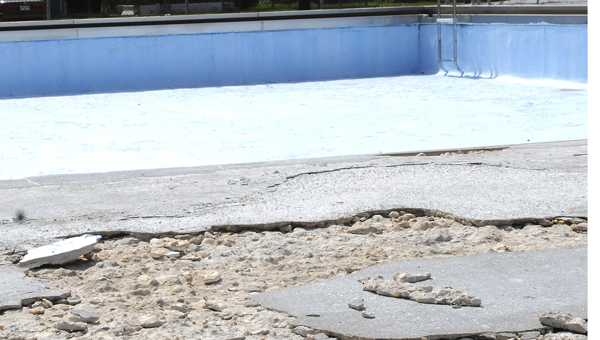 The Dinkins pool in Ward 8 is closed for the Summer but councilman Michael Johnson has received several offers of donations to help fix the pool. (By Josh Bergeron | Times-Journal)

Money is already beginning to trickle in for a dilapidated pool in Ward 8.

The William H. Dinkins Pool, located on the corner of Dexter Avenue and Division Street, closed this year for the first time in it’s history because of it’s condition. Cracked concrete and broken liquor bottles surround the pool’s exterior.

The pool, built in the 1970s, normally opens a few weeks after school ends and stays open until late July or early August.

After deciding not to open the pool, Ward 8 Selma City Councilman Michael Johnson said safety was the most important consideration.

“It really should never have gotten into that condition to begin with,” Johnson said. “The children would be running around there with sharp rocks and broken up concrete just laying around.”

Shortly after Johnson announced the pool’s closure, he began receiving calls from Selma residents who wanted to help with repairs.

“I had one guy that said ‘Michael, I’m not trying to talk. I’m coming to bring a checkbook,” Johnson said.

Donations haven’t reached the amount needed to repair or replace the pool, but Johnson said it’s a sign residents are concerned about its state. The Selma City Council also talked about using some of its oil lease funds to help repair the pool. Ward 4 councilwoman Angela Benjamin and Ward 7 councilwoman Bennie Ruth Crenshaw pledged to help with repairs by contributing oil lease funds.

“Sometimes we can get a little bit territorial, but kids from everywhere go out there,” Crenshaw said to Johnson during Tuesday’s city council meeting. “For your sake, I understand it’s not something that you are pushing because people come from all over the city.”

On a busy day, Parks and Recreation Director Elton Reece said the pool might see 75 to 100 visitors.

The pool is biennially painted and regularly maintained, through the parks and recreation department. But Reece said not enough money is budgeted to make large repairs.

Johnson and Parks and Reece initially estimated repairs would cost approximately $30,000, but before a firm decision is made, Johnson said he would consider multiple options and get multiple quotes on the repairs.

Costs could quickly become expensive, Reece said. The pool reaches 12 feet in some parts, which is rare for many commercial pools, Reece said.

Selma Mayor George Evans said quick work could mean a small window exists to open the pool before the summer ends, but Johnson said he preferred to make necessary repairs and leave the pool closed for one year.

Aubrey Larkin Jr. has been named the new principal of Selma High School. (By Sarah Robinson | Times-Journal) For the... read more