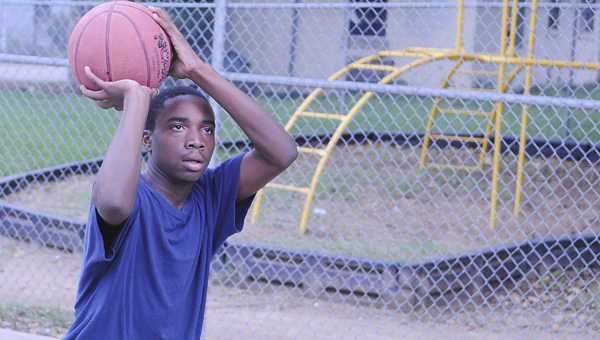 Amos King shoots the basketball Tuesday afternoon on a court along the railroad tracks on Laspley Street.–Daniel Evans

The basketball court along the railroad tracks on Lapsley Street is usually full of boys and girls shooting the ball and playing with friends, but on Tuesday it was a lot quieter.

When The Dart landed at Laspley Street Tuesday, it found a single youth, Amos King, a 15-year-old student about to enter the ninth grade at Selma High School, shooting hoops by himself. Thunderstorms early in the day had left the court wet, and mud conquered the ground around the outside of the basketball surface. Amos’ friends had decided to stay home rather than fight the elements. Only a stray dog, which belonged to one of his neighbors, had come by to keep him company on the rainy afternoon.

It was either stay inside and play video games — King has an Xbox 360 and a Playstation 3 that he loves to play — or wait for the rain to stop and shoot some basketball.

King never played basketball while he was at R.B. Hudson Middle School, but he did play football. The pigskin was his first love because he enjoyed playing running back. Now, after watching basketball on television and playing with friends, basketball sits atop the totem poll.

King said he is a Carmelo Anthony fan and like his favorite player, his jumpshot appeared pure Tuesday, as shot after shot found the bottom of the net. His unorthodox release is unique but effective.

King’s neighbor taught him how to shoot basketball, and now he plays with friends at the court on Lapsley Street on a regular basis. He’s been playing basketball recreationally for less than a year, but he can already tell the difference in his game.

“I can tell I am getting better because I know how to shoot and how to handle the ball,” King said.

The Selma City School board approved the proposal to convert a school of about 100 elementary students to an early... read more