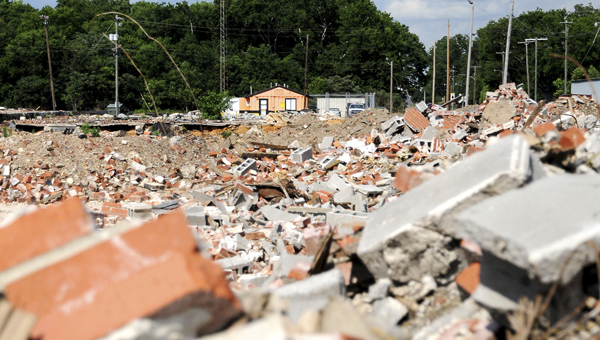 The site of the former Stewart-King-McKenzie Building is home to scattered bricks and other building materials. The building was demolished by Cooper Brothers months ago, but debris still needs to be hauled away.–Josh Bergeron

Ward 8 city councilman Michael Johnson has big dreams for a swath of land on Selma Avenue, but thousands of bricks stand in his way.

In September, Cooper Brothers Construction inked a contract with the city of Selma to demolish the former Stewart-King-McKenzie Building. The building was formerly a wholesale supply store. In September, Johnson advocated for the demolition, saying the building was a danger to the community and provided a hiding place for criminals.

Cooper Brothers president Tom Bolton said his company would complete the job for free. With the contract signed, Cooper Brothers demolished remains of the building in a few weeks.

The Selma Fire Department then burned wood debris and Bolton hired local residents to collect bricks that were later sold.

Months later, thousands of bricks and smashed concrete remain on the several-acre stretch of land.

“We have done all that was agreed upon,” Bolton said. “We were promised trucks and trailers and never got what we were promised. I think that now its safe to a point where people cannot hide and prey on small children, which was my goal from the beginning.”

Though Bolton completed his contract, Johnson said his patience is growing thin.

“I was so excited when it was being torn down, but now it’s just sitting,” Johnson said. “There is so much potential for the land. Until we get [the debris] cleaned up like it’s supposed to, we can’t really see what it really looks like.”

“We do not have the right kind of trucks or equipment to get it done,” he said.

As a result, the state of the former Stewart-King-McKenzie building remains in a limbo. Johnson said the city cannot move forward with any plans until the land is cleared.

No firm plans have been made to clear the property, Johnson said, but he has ideas about what the property could become.

Apartments were initially one of Johnson’s ideas, but the property’s close proximity to an active railroad crossing makes the area too noisy, he said.

Johnson’s other ideas include turning the area into a park or space for retail stores.

“It’s a big piece of land,” he said. “I think there’s potential for a lot of different things out there.”

Those interested in being chosen as extras in the upcoming filming of the moving ‘Selma’ wait just outside the Performing... read more