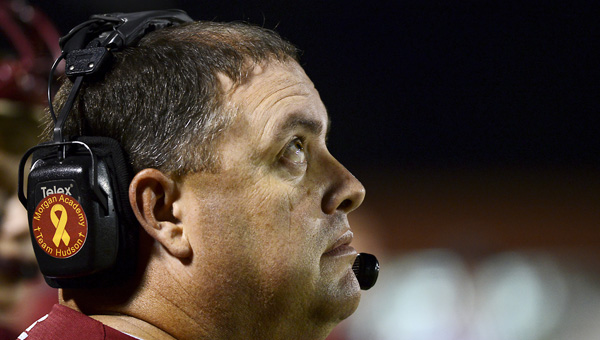 Morgan Academy head coach Bob Taylor looks up at the scoreboard during a football game last season against Monroe Academy. Taylor, who coached the Senators’ football team, basketball team and baseball team during his time with the school. He started with Coosa Valley Tuesday.—File Photo

The chance to continue coaching football was too good of an opportunity for Bob Taylor to pass up.

Taylor, who was relieved of his duties as head football coach at Morgan Academy earlier this year, officially signed a contract Tuesday to become Coosa Valley Academy’s new athletic director and football coach.

“When Morgan went out for spring practice, I realized how much I missed it,” Taylor said. “I love being part of the game and being in that aspect of it and it’s not that I don’t love basketball. I coached baseball there for a year at Morgan, but I truly love football and everything about it.”

When Coosa Valley came calling and offered him a chance to lead the Rebels’ football program, Taylor knew it was a great opportunity.

“Coosa Valley is a baseball tradition school and they won a state championship in 2010 in football,” Taylor said. “There’s a lot of good things going on here and we felt it was a good move for us as a family.”

Taylor led the Senators’ football program to a 6-14 record in his two seasons at the school. This spring, Morgan officials relieved Taylor of his duties as head football coach in order to lighten his coaching load.

“I love Morgan and I love all the kids at Morgan,” Taylor said. “I had a wonderful four years at Morgan. I think we accomplished a lot of good things and I think they are going to continue and improve and grow as a school.”

Although he’s leaving the Selma area, Taylor said he is going to miss it.

“Selma is a great town and it is not what everybody pictures it to be,” Taylor said. “I’ll tell anybody that.”

Taylor’s career record as a head football coach is 44-52 in nine years.

Along with coaching at Morgan, he has coached at Sumter Academy, West Alabama Prep and Lakeside.

Players learn while having fun at Selma volleyball camp