‘Selma’ effect on city could be a mixed bag 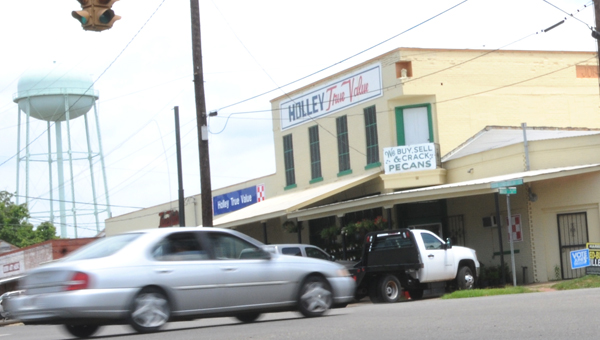 Holley True Value, just off of Water Avenue, was told by movie crew that filming might close business for one day. The store sells a variety of products, from lawn and garden products to hardware. (Josh Bergeron | Times-Journal)

Members of the “Selma” film crew are scheduled to arrive in town Sunday and begin preparing for four days of filming, but other than a decrease in open hotel rooms, Selma residents are unsure of the effect on the local economy.

The movie crew is expected to fill about 30 rooms in the St. James Hotel, with dozens more rooms potentially being filled at other hotels by staff and actors.

“Hotels and the lodging industry will see the biggest boost from the movie,” Selma-Dallas County Chamber of Commerce director Sheryl Smedley said. “I know they have been working with all the local hotels and made several trips, which is why we were selected. I think it’s a great opportunity to have a major motion picture come to our community.”

“We hope that our  choice to film here will assist the local economy as we employ local residents in the positions of extras and production assistants,” Duvernay said in an email. “In addition, our crew lodging and some of our dining will benefit local businesses in Selma.”

The movie’s staff will pay approximately $31,000 for its stay in the St. James Hotel, Selma Mayor George Evans said Thursday. The payment will result in air conditioning and freezer repairs in the hotel, Evans said.

Other directly observable contributions to Selma include payments to use city-owned buildings, which Evans estimated would be less than $100,000.

As for other economic effects, Selma may want to look to Marietta, Ga., where filming has been for multiple weeks.

Selma could see similar results, as the movie’s crew plans to close the Edmund Pettus Bridge for approximately three days. The bridge closing is scheduled to only affect daytime traffic. The bridge will open up once filming is complete each day, location manager Wes Hagan said during a May town hall meeting. Hagan said other downtown streets could be closed but didn’t list specific examples during the meeting.

Northbound traffic into Selma won’t be completely cut off during the bridge closure, with the U.S. 80 bypass remaining open. Surrounding street closures, however, could force businesses to close.

Alden Holley, owner of Holley’s True Value in downtown Selma, was previously approached about closing down his business one day for filming. His store offers a variety of hardware products and a bill payment center.

His storefront parking lot is frequently filled to the brim with customers’ cars. With the movie’s filming scheduled to begin in Selma on June 23, Holley said a degree of uncertainty surrounds how his business may be affected.

“It’s not going to help me being closed,” he said. “If it boils down to watching a movie film outside or keeping my businesses open, I would certainly choose my business.”

The “Selma” movie crew previously offered to pay Holley for the closure, but an amount hasn’t been determined, Holley said.