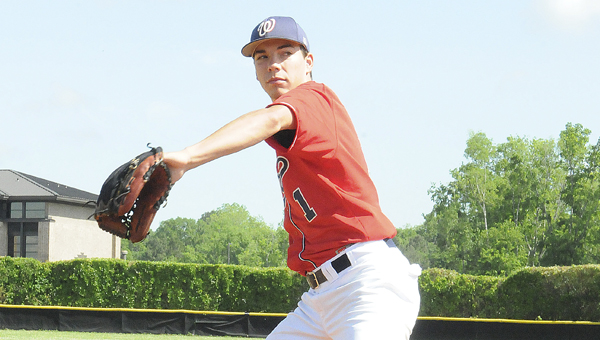 Wallace Community College Selma pitcher Kevin Simmons was drafted by the Arizona Diamondbacks in the 16th round of the MLB Draft Saturday,–File Photo

A faulty computer forced Kevin Simmons to wait a few extra minutes Saturday to celebrate one of the biggest moments of his life.

Simmons, was selected in the 16th round of the 2014 MLB Draft, but he missed the chance to hear his name called because his computer froze right before he was picked.

“We missed it on the TV because our computer froze, so I had family calling to ask me if I saw it and I asked them ‘What did I miss?’” Simmons said. “And then the Diamondbacks called me.”

Once Simmons received a phone call from Arizona’s Joe Mason, the first scout that came to watch him pitch this year, the celebration was on.

“They said ‘Congratulations, we got you,’” Simmons said. “It was the area scout that had been following me all season.”

Friends and family chased Simmons around the porch with confetti shooters to celebrate.

Other players from Wallace have gone on to other schools and been drafted, but Simmons is the first player from Wallace to be picked in the MLB Draft, Patriots’ athletic director Marcus Hannah said.

Simmons graduated from Dallas County High School and went to Mississippi Valley State for one year, before transferring to Wallace so he could be closer to home.

This year he started throwing the ball in the mid-90s, which caught the eye of major league scouts. He finished third in the National Junior College Athletic Association in strikeouts with 109.

“He just keeps getting better, better and better, and I don’t think we’ve seen the best of him yet,” Wallace head coach Frank Elliot said.

Elliot said with the work ethic that Simmons has, he could definitely find himself on a major league roster one day.

Simmons signed with West Alabama in the fall, but after being drafted Saturday, he is planning to pursue his major league dreams.

“He truly works hard even with the gifts that God has given him,” Hannah said. “He’s a very hard worker out there trying to make his gift better.”

The wait was a little longer than Simmons had anticipated. After talking with teams over the last couple of weeks leading up to the draft, he felt there was a good chance he could go on day two of the draft. A large group of family and friends held a party for him at his aunt’s house, but he went to bed Friday still waiting for his major league moment.

On Saturday, it finally came.

Simmons is waiting to hear back from the Diamondbacks about where he goes from here, and he expects there to be the equivalent of a rookie camp before he finds out where he will be playing.

Arizona has minor league affiliates in Nevada, California, Indiana, Oregon, Montana and Mobile — home of the BayBears, so there is a chance he could play some of his minor league games close to home.

WCCS pitcher Simmons is not nervous about MLB Draft

Although he doesn’t have butterflies yet, Kevin Simmons expects to feel them Friday while he waits to see if his... read more