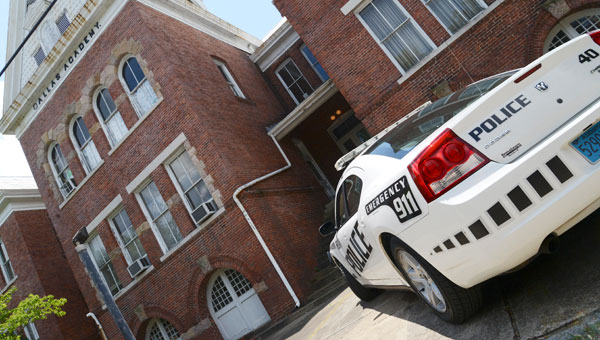 Police swarmed to the old Dallas Academy building early Friday afternoon after a man pulled a knife on a woman working on the building’s second floor. (Jay Sowers | Times-Journal)

Police are searching for a man who pulled a knife on a woman during an attempted robbery at the old Dallas Academy building Friday.

The woman was working in the Alabama Department of Revenue’s Tax Payer Service Center on  second floor of the Selma Avenue building when the incident occurred around noon Friday.

In a news release Selma Police investigator Curtis Muhannad said police are searching for Roen Lee Rivers, 35, in connection with the attempted robbery.

Muhannad said the victim had attempted to help Rivers when he approached her and asked for directions to a local business.

“That was just a decoy,” Muhannad said. “We know now that he was trying to rob her. But by the time he pulled the knife she started screaming and pushed him away before he could run from the building.”

Muhannad said the victim was shown photographs of suspects who fit the description she gave investigators after they arrived on the scene, and she identified Rivers as her attacker.

Muhannad said Rivers is currently at large and is considered armed and dangerous.

Artist Vicky Stoudenmire was working in her studio on the third floor visiting with a friend when it occurred.

“My studio is on the third floor and she’s directly under me,” Stoudenmire said. “I just heard her scream. But we hear people out on the street yell, so I looked at Peggy [Brown] and asked, “What was that?” She didn’t know, so we kept talking. A couple minutes later, Peggy came back up the stairs and said somebody had pulled a knife on her.”

Stoudenmire said she did not see the suspect leave the building.

Candi Duncan, director of the Ceramic Arts Program located on the building’s first floor, said she was sad to hear the incident occurred and was convinced it was a isolated incident.

“I’ve been in this spot 32 years, and things like this come and go,” Duncan said. “This could have happened anywhere.”

Picnic on the Green talks about poverty

Community leaders gather at Sturdivant Hall for Picnic on the Green, an event coordinated by the Dallas County Family Resource... read more