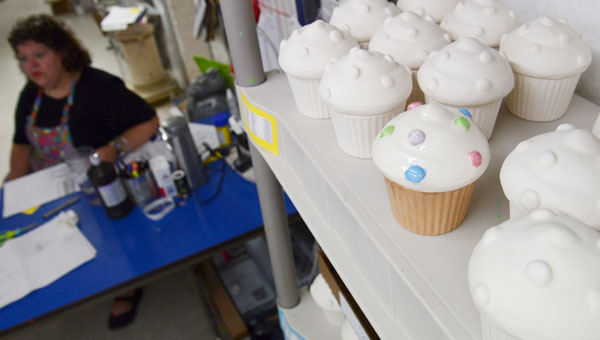 Candi Duncan talks about the City of Selma Ceramic Art Program’s Art Camps Thursday, near a display of ceramic cupcakes the camps participants will be paint as one of their projects. (Jay Sowers | Times-Journal)

A year of preparation is soon to pay off as the Ceramics Arts Program hosts its annual summer art camps in the coming weeks.

“We started preparing for this year’s camps as soon as last year’s ended,” said Ceramics Arts Program director Candi Duncan. “It’s a tremendous amount of preparation so they can have fun and not have any down time while they are here.”

There will be plenty for this year’s participants to cover during the two camp sessions, which will run from June 9 to June 13, and July 7 through July 11.

Children participating in the camps will have opportunities to learn about nearly twenty forms of art, and they will create numerous pieces of their own to take home at the end of the week-long camps.

”We promise the kids they will finish seven projects, but they usually go home with a dozen finished art projects,” Duncan said. “It depends on how quick the children work. We have the schedules made up for the first day, but we won’t schedule the later days until we figure out the pace the kids will work at.”

Cindy Stoudenmire will help Duncan lead the camps, and she said she thinks the variety of art forms will keep the participants interested.

“We’ll spend about 30 minutes on each subject,” Stoudenmire said. “That way it’s not long enough for them to get bored or in trouble. The camp is all about having fun, and we want to keep them entertained so they can do that.”

Duncan said both camps are full, as more than 50 area children signed up for each.

“I wish we could open it up to more and more kids,” Duncan said. “But this size just works for us. If people want their kids to take part in the camp, they really have to sign up as soon as we started promoting it in the spring.”

Duncan said the amount of topics covered at the camps gives children the chance to learn about art forms that are new to them.

“Other camps and classes make kids pick one art form to stick with throughout the event,” Duncan said. “But we feel it is important to give them a taste of each one of the different art forms so they might find what they really like to do.”

not over yet: LaTanglia Williams is escorted out of Selma High in April 2013. Her Sunday release resulted in two... read more