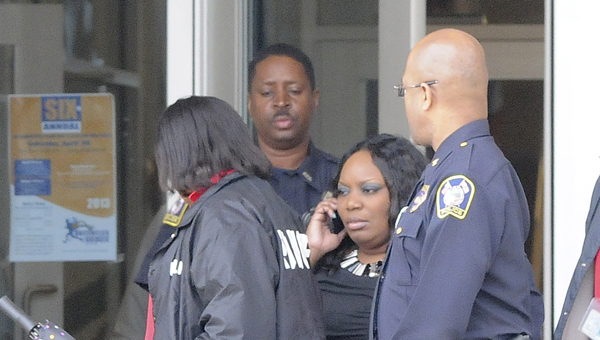 not over yet: LaTanglia Williams is escorted out of Selma High in April 2013. Her Sunday release resulted in two different court motions being filed. (File Photo | Times-Journal)

The State of Alabama’s case against former Selma high teacher LaTanglia Williams is going back to court.

Williams was temporarily released from jail Sunday to attend an anniversary celebration at her parent’s church — John the Baptist — in Orrville. Her release resulted in two motions — one from District Attorney Michael Jackson and a second from defense attorney John W. Kelly III — filed in Dallas County Circuit Court.

Before filing his  motion, District Attorney Michael Jackson denounced the release publicly Monday and accused Williams of violating her sentence.

Williams sentence was 10 years, which was suspended for 14 months and three years of probation.

“She is a registered sex offender and an ex-teacher who got in trouble for messing with students and just got out like the jail is a hotel,” Jackson said Tuesday.

Jackson also asked for tightened restrictions and for Williams to be moved to another jail.

“When the district attorney chooses to hold press conferences and media events on the eve of an election, before he has filed a pleading and before he has even given it to the lawyers of the defendant, I don’t think that advances the cause of justice in Dallas County,” Kelly said Wednesday. “[Williams] was not treated any differently. Any inmate can make a request.”

Kelly’s  motion states that Williams honored all terms of her release, granted through the Dallas County Sheriff’s Department. During Williams’ release, she remained under legal custody and supervision of the sheriff’s department, according to the motion.

If successful, Kelly’s motion would mean Williams’ sentence remains unchanged. She would serve 14 months, followed by three years of probation.

With both filings submitted, Jackson said Meigs would hold a hearing and make a final decision. No date has been set for the hearing.

Meigs could also choose to hold the sheriff’s department in contempt of court for violating Williams sentence, Jackson said.

“My argument is that they didn’t have the authority to release her,” Jackson said.

Williams’ time in jail began in April after she pled guilty to having sexual contact with a student at Selma High.