Election goes off without major glitches 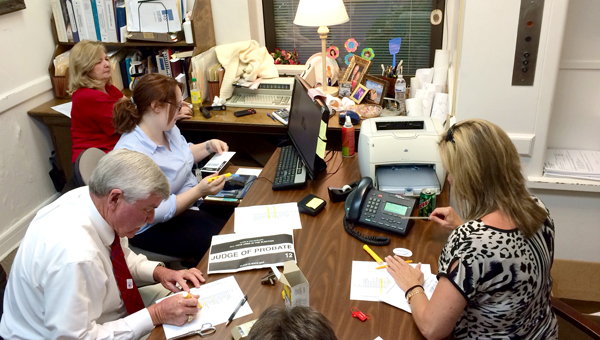 With the exception of a few ballots that did not stand up well to the Alabama Summer humidity, Tuesday’s party primary elections went off with very few glitches, officials said.

“It went tremendously smooth,” Dallas County Probate Judge Kim Ballard said Tuesday night. “I went around to just about every polling place in the county and was pleased with the way everything was going. We really could not have asked for a better day.”

Overall, 11,408 registered voters cast a ballot in Tuesday’s election. All of the locally-contested races were on the Democratic ballot. Only 170 voters chose to vote in the Republican primary.

“Traditionally, without a major national or statewide election, turnout would have been terribly low,” Ballard said. “In this case, I had predicted 25 percent turnout, so to get nearly 37 percent, I am really pleased.”

Tuesday’s election also was the first one abiding by the state’s new voter ID law, a change Ballard said had little impact on.

“I cannot tell you one problem we had in regards to the voter ID requirements,” Ballard said. “Like I said, with few exceptions, today’s election went very, very well.”

Selma native and resident Iverianna Williams, 19, said she wants to see a positive change in Dallas County and believes her vote can make it happen.

While the general concept of voting was important to Williams, she said she was most concerned with voting for an individual that will be able to further improve law enforcement in Dallas County area.

“Most of my classmates went to jail or were just killed,” Williams said. “I just hope there is change to stop this gun violence.”

Selma resident Clyde Thomas, who voted at the Dallas County Courthouse, was continuing a tradition that began almost 50 years ago, on the Edmund Pettus Bridge.

“My grandparents marched in the 1960s and I just felt like I can’t let them down,” Thomas said. “I wanted to participate in the process and do my civic duty.”

As for the statewide races, Parker Griffith received the bulk of local support in his bid to become the Democratic nominee in the race for Alabama Governor. Gov. Robert Bentley received all but four local Republic votes in his re-election bid.

In the Dallas County Democratic Executive Committee (female) District No. 3 race, Selma City Councilwoman Bennie Ruth Crenshaw received 25.26 percent of the vote to outpace the other five women vying for the position.

A fire destroyed this house at the intersection of Minter Avenue and Tremont Street shortly after 1 a.m. Monday. —... read more