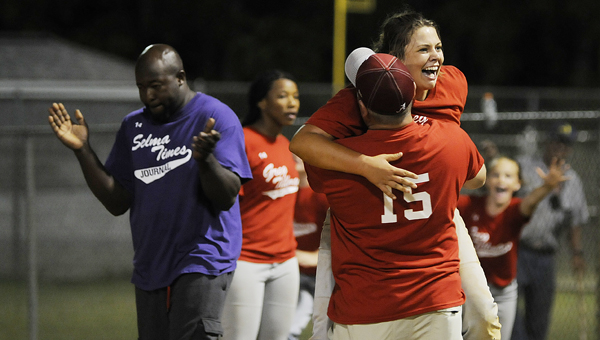 Greg Tillman State Farm trailed 12-3 after the third inning but closed the game with a huge rally. When Lewis stepped to the plate in the fifth inning, State Farm had cut the deficit to three runs.

Lewis did the rest, ripping a shot to the right-field fence and racing home for an inside-the-park grand slam, giving her team the lead for good.

In the first game, State Farm showed it was on a mission with an 11-4 win.

In the opening contest, State Farm’s bats heated up, while the Times-Journal hitters struggled to bat runs in. The team left the bases loaded three times in the first game, a trend that would continue throughout the night.

The Selma Times-Journal also struggled with defensive errors throughout the first game of the night, including botched throws and wild pitches.

“The hitting worked out for us,” Holley said about the first game. “We have some key players at the top of our lineup, and they’re all playing with heart and never giving up.”

The final game was a high-scoring thriller that began with the Selma Times-Journal scoring three runs as State Farm pitcher Shelby Boswell struggled to find her groove.

After Times-Journal pitcher Dajah Thrash closed out the first inning with two strikeouts, the Selma Times-Journal went up to bat with a 3-2 lead. State Farm tied it up 3-3 going into the third inning.

With a new pitcher in the circle for Greg Tillman State Farm, Selma Times-Journal rallied in the third inning, scoring a total of nine runs on a combination of pitching errors and several key hits.

Thrash shined in the third by hitting an RBI single to shallow center, then stealing home later in the inning.

After a fourth Times-Journal batter was hit, Boswell returned to the circle with confidence to close out the inning for State Farm. The third inning ended with the Times-Journal up 12-3, leaving State Farm with an uphill battle.

State Farm started its rally in the fourth inning, cutting the lead to 13-8.

Holley said his team worked hard to earn the title, and leaders like Boswell helped the team stay motivated throughout the series.

“She’s a team leader,” Holley said about his star pitcher. “When things are down, she gets everybody back up.”

Boswell said when she returned to the game, the pressure helped her stay calm and trust her defense.

“I was thinking that as long as I pitched right, they would have my back,” Boswell said about her teammates.

“This game means a lot because we were down by nine, but we still came back. I’m glad we kept fighting.”