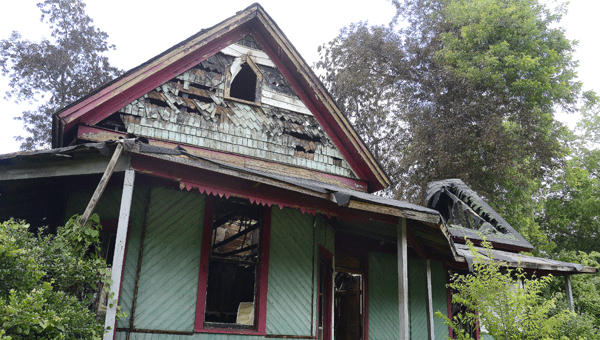 A fire destroyed this house at the intersection of Minter Avenue and Tremont Street shortly after 1 a.m. Monday. — Jay Sowers

Police and fire investigators are working to understand how a man suffered severe burns in a suspicious fire that destroyed an abandoned house early Monday morning.

Selma Fire Chief Mike Stokes said he and his department responded to a call about a house fire in the 1500 block of Tremont Street, near the intersection with Minter Avenue, at 1:14 a.m. Monday.

“Seventy percent of the building was involved when we arrived, and we did find evidence it was a set fire,” Stokes said.

While at the scene, Stokes said authorities learned a man suffering from severe burns had been taken from the scene before fire crews arrived.

“There was a burn victim, and this person was taken from Selma by helicopter because of the degree of their injuries,” Stokes said. “I can tell you they are severe burns. They are third-degree burns.”

Stokes said the State Fire Marshal’s Office would be leading the investigation into the fire.

Mary Hinson, who lives across the street from the location of the fire, said she was asleep at the time the fire started.

“I was in there asleep and my son woke me up, saying something was burning, and when I ran outside the house was just totally on fire,” Hinson said. “I didn’t see anybody leave the building when I got out there, but the gas can was still in the street and it was still on fire.”

Along with a burn mark being left on the road by the gas can, trees, bushes and a nearby home were also damaged in the fire.

“We do have an investigator on this fire, but there is nothing to report at this moment,” Holmes said. “Selma, meaning the local fire, police and sheriff’s department, will be conducting their own investigations.”

Holmes said he was unsure what the investigator had been able to uncover about the cause of the victim’s injuries.

“We do have an injury connected with this fire,” Holmes said. “But I truly don’t know anything about that right now.”

Selma is full of welcoming surprises

By Scottie Brown The Selma Times-Journal   Welcome to Selma. Those are the words I have heard the most since... read more