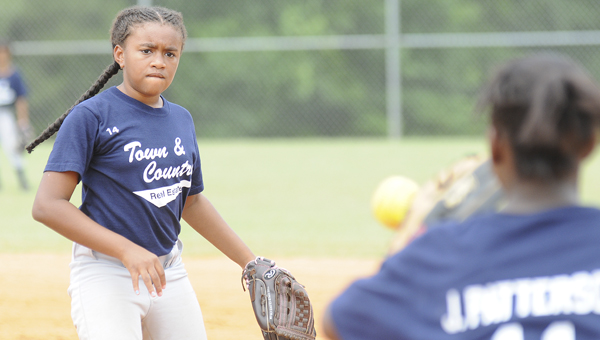 Town & Country’s Kaylin Stanberry fields a ground ball and throws to first baseman Jakalyn Patterson during Saturday’s game versus Pilcher McBryde at the Dallas County Sportsplex. Stanberry and Town & Country won the game 7-2, forcing a winner-take-all championship game Monday night where the winner will be crowned the 9 and 10-year-old softball championships. –Daniel Evans

A win Saturday would have given Pilcher McBryde the 9-and 10-year-old girls softball championship, but Town & Country had other plans.

Town & Country rallied from a 2-1 deficit with two runs in the fourth inning and two more in the fifth for a 7-2 win that sets up a winner-take-all championship game Monday night at the Dallas County Sportsplex at 7 p.m.

“The key for us today was we played good defense and we hit it really well today,” Town & Country coach Charles Neely said.

The game turned in the fourth inning when Pilcher McBryde’s Kennedy Thicklin singled deep into center field and tried to turn it into a double.

In the bottom half of the inning, Town & Country’s bats found a spark.

LaShore Gordon singled to score Jakalyn Patterson to tie the game 2-2. Just a few moments later, Gordon scored off of a single by Brea Gordon, giving Town & Country a 3-2 lead that it would not relinquish the rest of the contest.

In the bottom of the fifth, a double by Janiya Heard and a single by Antoneree Tate put two more runs on the scoreboard and helped Town & Country put the game out of reach.

“My girls were just not in it this morning,” Pilcher McBryde head coach Idette Clay said. “We usually have 7 o’clock games.”

Pilcher answered in the second, when Mercedes Benjamin grounded into a fielder’s choice but scored Megan Nix.

Pilcher took a 2-1 lead in the fourth when Laila Mitchell beat a throw to first and scored Hope Smith.

From there it was all Town & Country, who found its rythym just in time to keep its season alive.

Now both team’s are turning their focus to Monday’s championship game.

“We have to stay focused, maintain our hitting and play good defense,” Neely said. “If we do that we will win the championship.”

Auburn University at Montgomery pitcher Cassie Daniels throws a pitch in a game earlier this season. Daniels and the Warhawks... read more