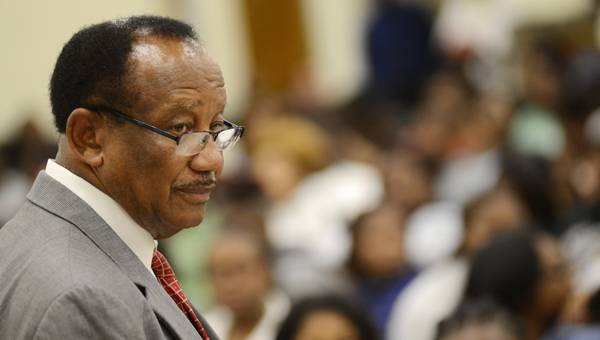 Editor’s note: This is the final installment of the Times-Journal’s review of discretionary, travel and oil lease fund expenditures on the part of the Selma City Council and Selma Mayor George Evans.

Selma Mayor George Evans’ $70,000 salary is just one portion of the city funds he personally receives each year.

Three different funds — discretionary, travel and oil lease — are specifically designated for Evans’ use. Each year, discretionary and travel are set at specific amounts. The city’s 2014 budget allocated $10,000 for travel and $7,500 for discretionary use.

Oil lease functions differently. Each year, the city receives one lump sum from the Alabama Trust Fund, which was established to receive money from oil and gas wells along the Alabama Coast. The lump sum is subsequently divided among the city council and mayor. In 2014, Evans received $17,800.

Discretionary funding largely functions as a funding mechanism for local charities and organizations. For Evans, it’s the smallest of his three funds, according to the city’s fiscal year 2014 budget.

Evans said he doesn’t focus on particular groups, but does judge the legitimacy of each organization before spending discretionary funds.

“There are people who have needs and children that have needs,” Evans said. “Discretionary funding is just a means to give back. It’s just generally based on who requests money; if they ask, they will get it.”

Donations to sororities represent a small portion of his overall expenses, but are the most frequent discretionary expenses, according to city finance documents ending Feb. 28. His largest expense was to New Shady Grove Baptist Church at $500.

Evans said the sorority expenses and church donation were for specific events.

As of Feb. 28, Evans spent $2,625 in discretionary funds, which is less than all nine city council members.

Travel and training is the second largest of Evans’ three funds. Only three trips are listed on Evans’ financial documents ending Feb. 28.

The first expense was for Kennard Randolph, whose official title is youth and senior citizen coordinator, to attend a leadership conference in Auburn. Evans said the expense appeared on his financial report because Randolph doesn’t have a travel allocation.

“Generally other employees would have it in their budget,” Evans said.

Henry Thompson, who works in planning and development, also attended the conference, but Evans said the expenses were charged to his department’s travel account.

“I had just come from Seattle and went straight [to Biloxi],” Evans said. “All of them were there certainly trying to create business for their city or state.”

Evans also traveled to Washington D.C. for the State of the Union Address in January, but used personal finances to pay for the trip.

As of Feb 28, Evans spent $3,975.94 on various travel expenses. It’s more than every city council member, except Ward 4 councilwoman Angela Benjamin, according to city documents.

Oil lease funds can be used for infrastructure projects, such as road improvements, or matters of health and safety, such as stop signs.

At the end of February, Evans hadn’t spent any of his oil lease funds, according to city documents.

Since then, Evans spent $15,000 to repair Memorial Stadium’s track in preparation for two track meets.

“I went ahead and paid for it because it was urgent with the track meets coming up and needed to be done,” he said.

His oil lease expenditures — $20,882.49 —are the second largest, when compared against council members, according to city documents. Ward 8 councilman Michael Johnson is the biggest spender of oil lease funds by just over $1,000.

The Selma City Council has the ultimate authority over the specific amount of money allocated to each fund. Recently, the council has considered multiple measures to change funding formulas for discretionary and oil lease money.

Evans said he doesn’t have a particular opinion on funding changes.

“I can accept whatever the council decides to do,” he said.

The announcement this week that the Selma Lions Club is closing the old National Guard Armory to public use because... read more